Does it surprise you that before life got so complicated with kids and school and mortgages, all I would think about was where in the world would I go next, and how was I going to get there? I would leave a job at the drop of a hat if a traveling opportunity arose, and I’d never commit to more than a casual position for that reason. I think it’s what they call Wanderlust… I still have it, although things are more complicated now. 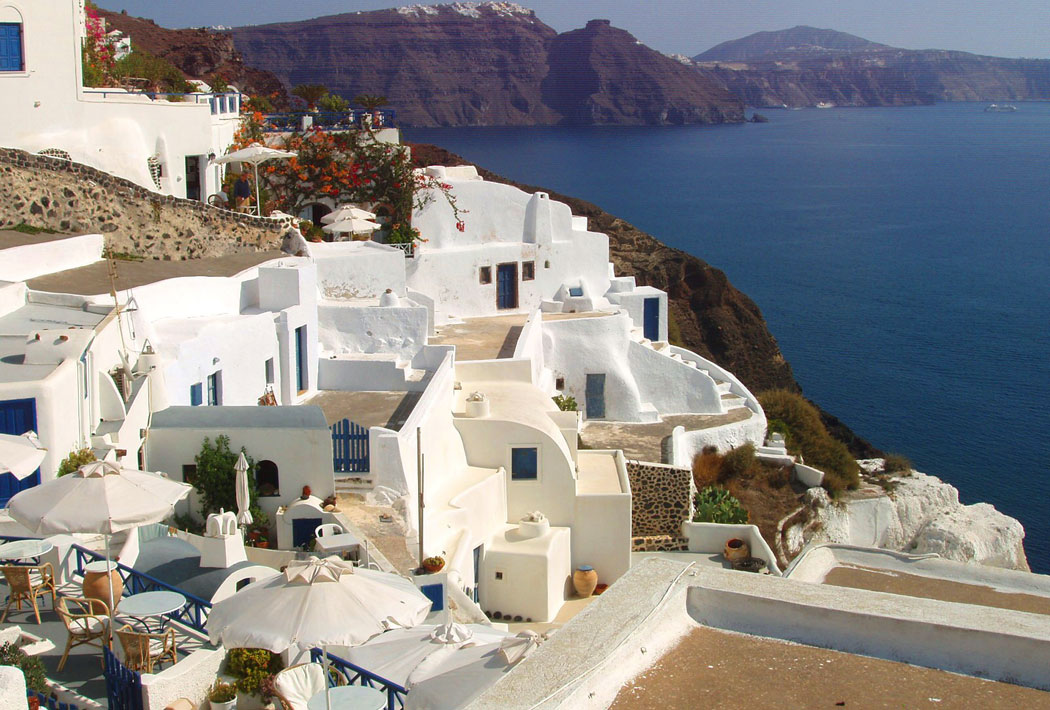 Here are some photos, sketches and memories from a trip to Greece in 2006. I spent 5 weeks traveling with a friend.

Santorini, yes it’s truly postcard perfect. There is something about the quality of light there that makes every vista amazing. We didn’t stay in the picturesque village of Oia, which is probably one of its most recognised places, but we did catch the bus there most evenings just to watch the incredible sunset which would colour the whitewashed buildings a beautiful shade of coral then slowly change though to violet as the sun finally set.

And everything was so intensely white that in the midday sun the glare was almost blinding.

Another memorable place that had been on my wish list since my first trip to Greece 10 years earlier, was the Monastery complex of Meteora in the north of Greece. We spent 2 days walking up in the hills and visiting these 14th century monasteries perched impossibly atop sandstone rock pillars. It was a very special place which had a certain spirituality about it, so it didn’t surprise me that hermit monks chose to inhabit caves there as far back as the ninth century.
Originally the only means of access to the monasteries was by precarious rope ladders or cargo nets, but now there are stairs and paths which make visiting them easier but still hard work. I think I was fitter back then. Interestingly I snapped a pair of orthodox priests travelling across a ravine in a very precarious looking cable car (below), it looked just like a little bath suspended in mid-air being kept up only by prayer.

And lastly I’d like to share this photo of a ‘china’ stall at an Athens flea market. It was so amusing, I can’t even imagine what would possess someone to stack up such fragile objects to haphazardly. I wonder what the vendor would have done if I’d asked to see ‘that vase’ right at the bottom? Imagine the gems hidden amongst that lot?

Looking back at these photos taken with my point and shoot digital, I can’t help being impressed at how well it performed.

Did you enjoy this mini adventure? Just like traveling without the jet lag or leg cramps. Will share some more ‘Cinti’s Travels’ if I ever have time to dig out some more old photos.