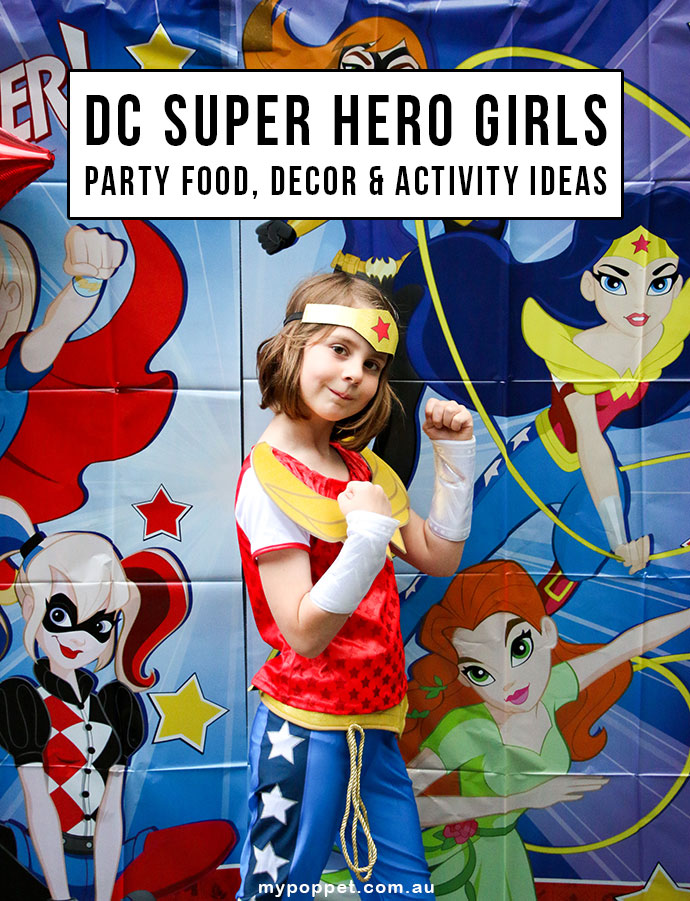 Brought to you by Warner Bros. Consumer Products – This post may contain affiliate links.

After attending the official launch of DC Super Hero Girls earlier this year, Emma has been really enjoying getting to know these new teen DC Super Heroes! We’ve been watching their exploits at Super Hero High on YouTube, and when Warner Bros. Consumer Products asked if Emma would like to host a party for her friends, of course the answer was YES!! 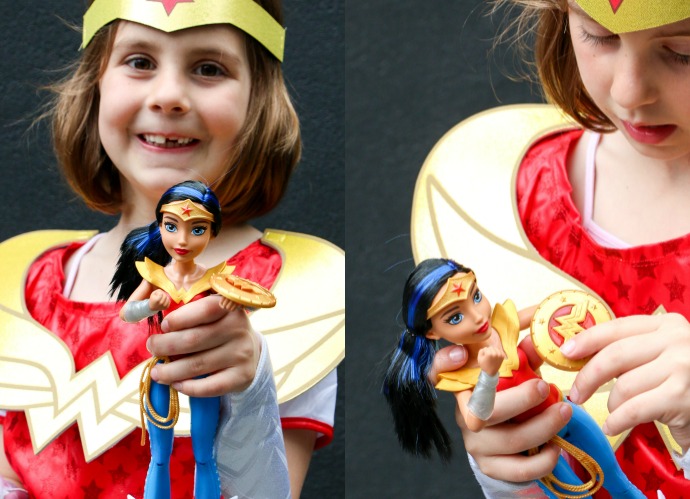 Emma is no girly girl, she loves characters that are strong, confident and sometimes get up to mischief. Now that she is 7, fairy tales, princess dresses and waiting to be rescued, just aren’t cutting it, she is looking for action and adventure, and DC Super Hero Girls fits the bill. It’s an exciting new universe, developed with girls aged 6-10 in mind, of Super Heroic storytelling that helps build confidence, and empowers girls to discover their true potential. The stories centre on the female Super Heroes and Super-Villains of DC Comics as they explore their teen years.

With all the colourful costumes, and party goods, it was easy to throw together a fantastic party with minimal effort on my part. The girls had a really fun time, and they are now all huge fans of DC Super Hero Girls.

Each girl chose a few temporary tattoos and got ‘inked’ whilst their friends arrived for the party. 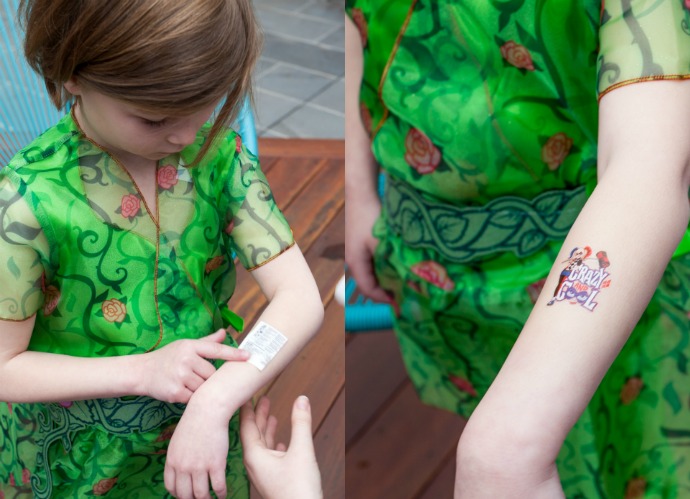 The party officially kicked off with the girls getting changed into their favourite character’s costume and posing for some fun shots in front of the photo wall. The giant posters really set the scene for the party, and provided a colourful back drop for lots of the activities through the day. 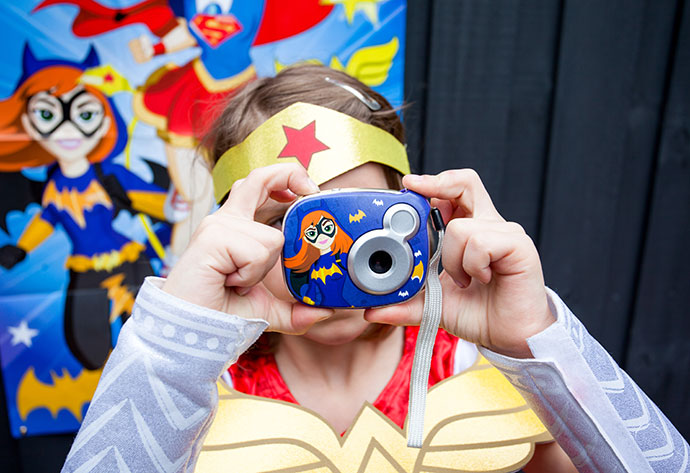 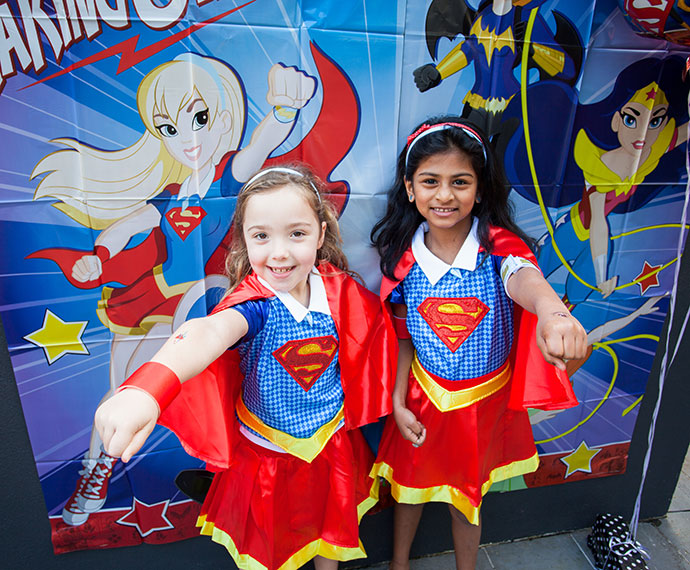 PIN THE SHIELD ON THE DC SUPER HERO GIRL

A party favourite, this alternative to ‘pin the tail on the donkey’ was a hit. The game comes with a colourful poster, a mask and stickers to ‘pin’ on. It was lots of fun and the girls were uncannily accurate, maybe their ‘powers’ of x-ray vision kicked in! 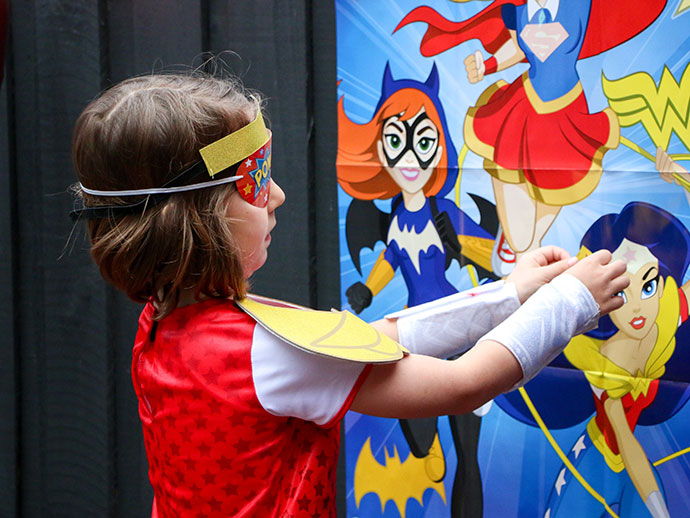 The girls requested this game, and it was energetic and very competitive! The aim of the game is to dance like nobody is watching, but when the music stops, you need to freeze. Anyone that moves is out! We had 2 rounds and the winners were very pleased with their DC Super Hero Girls prizes. 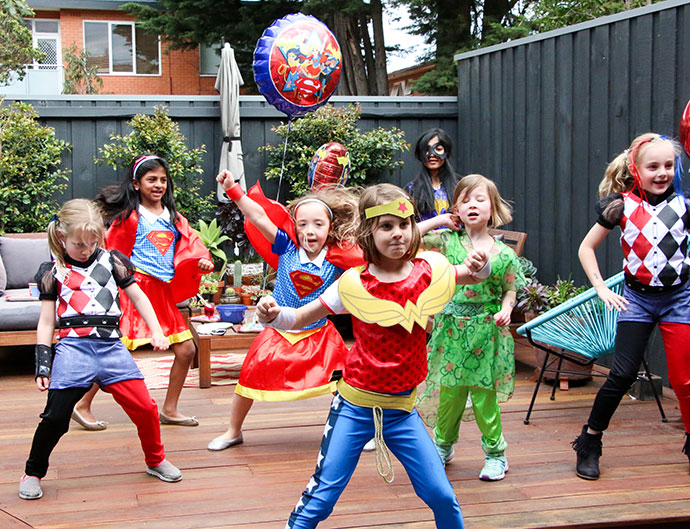 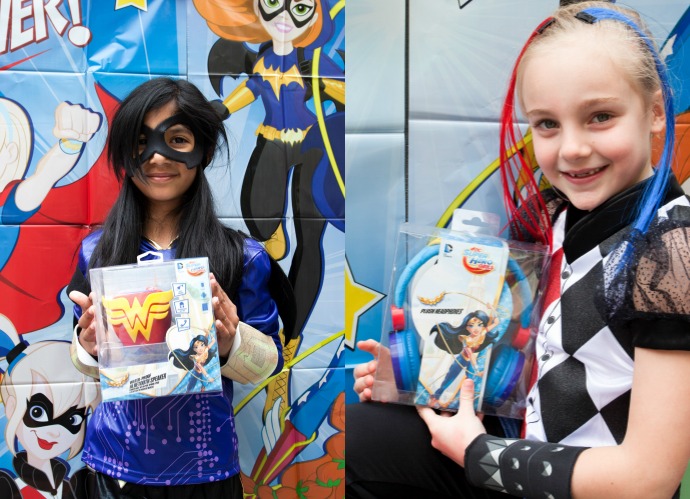 I set up a small target in the garden and the girls took turns at firing disks from the Wonder Woman Shield to see who had the best aim. It was trickier than it looked! 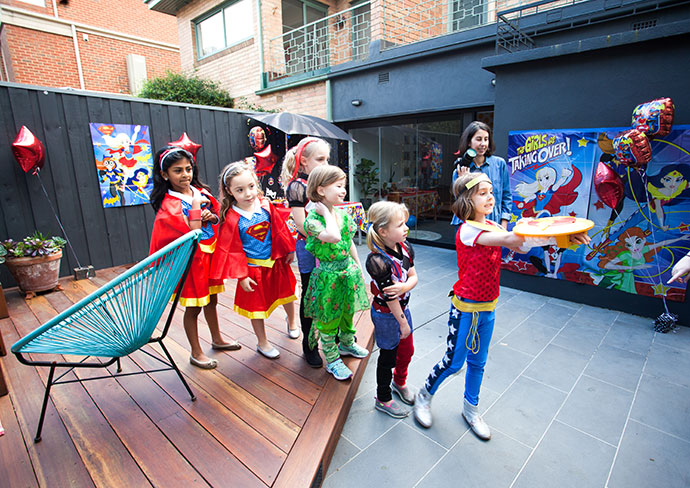 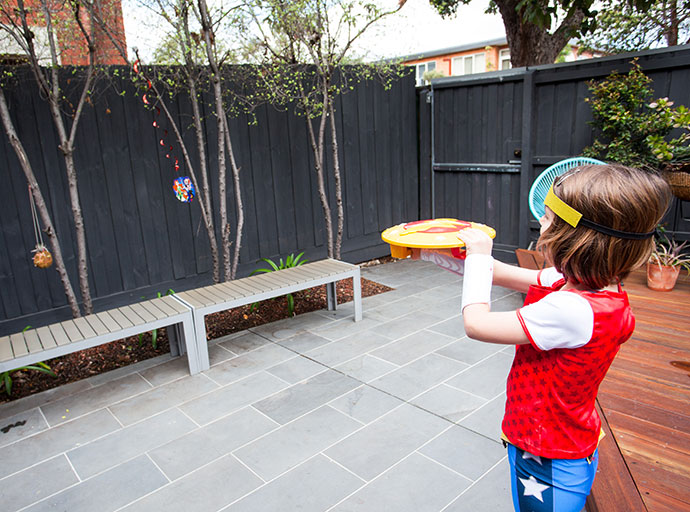 After all the excitement from the shooting game it was time to watch some animated shorts and wind down a little bit. We hooked the laptop up to the TV and watched some new DCSHG episodes straight from the YouTube channel. 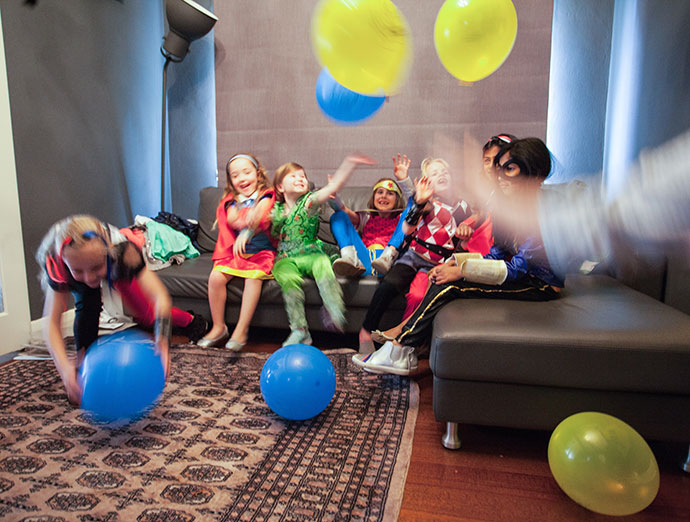 A party is not a party without a piñata. Normally we make our own, but it was just as easy to pick up a ready made themed one, all I had to do was fill it with candy. Piñatas are always very exciting and the girls couldn’t wait to get to the candy. Everyone had a couple of turns of 3 hits each, which was just the right amount to rip the side and let the candy escape. 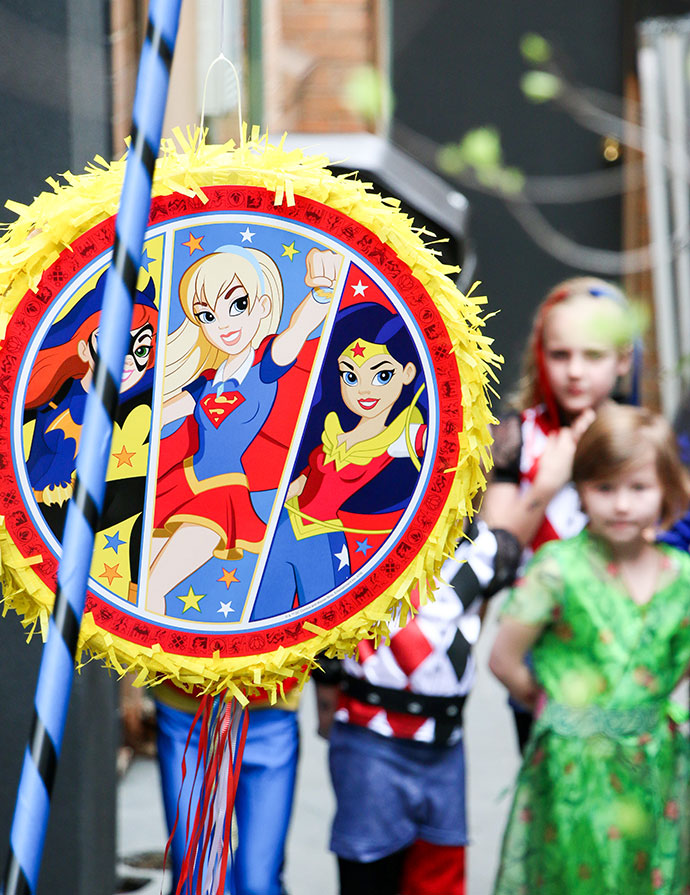 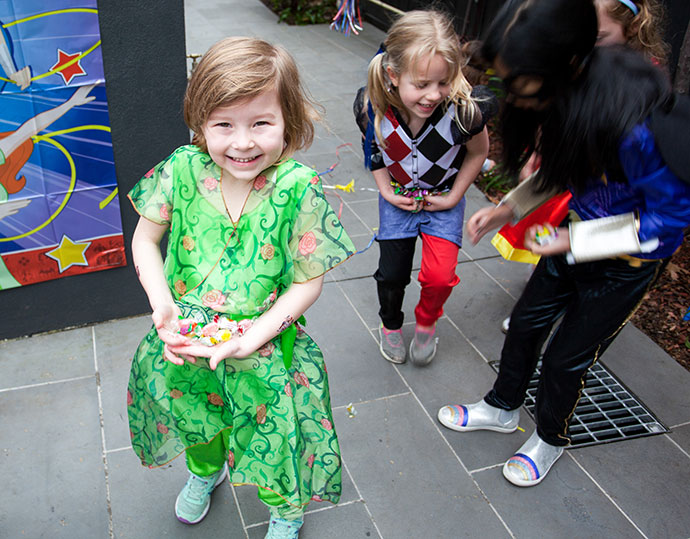 We were very lucky to be one of the first people to try out the new DC Super Hero Girls Karaoke Machine. It was so much fun and singing and dancing was a nice way to wind down the party. It has the option of either playing CDs or connecting to a phone or tablet to play your favourite songs. One microphone is supplied but it has the option for 2 if you have another handy. And best of all, it has in-built flashing lights for an instant disco effect. This would make a great Christmas present, Emma is in love with it. 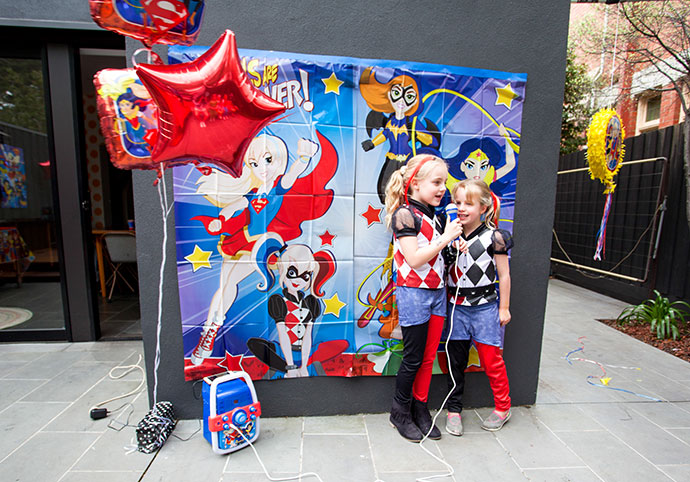 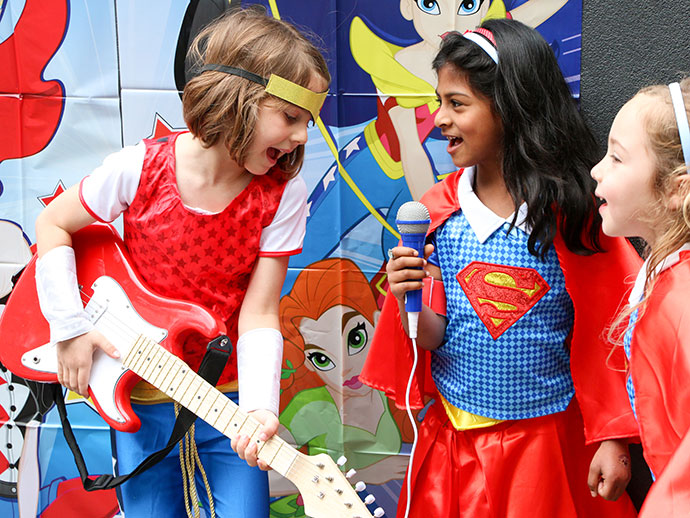 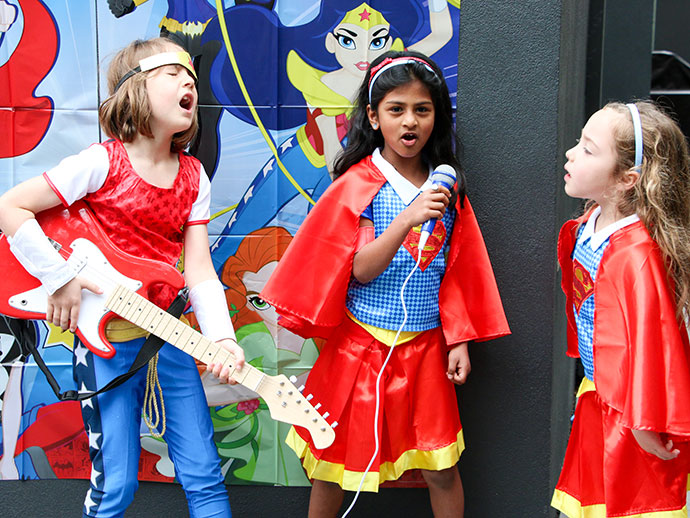 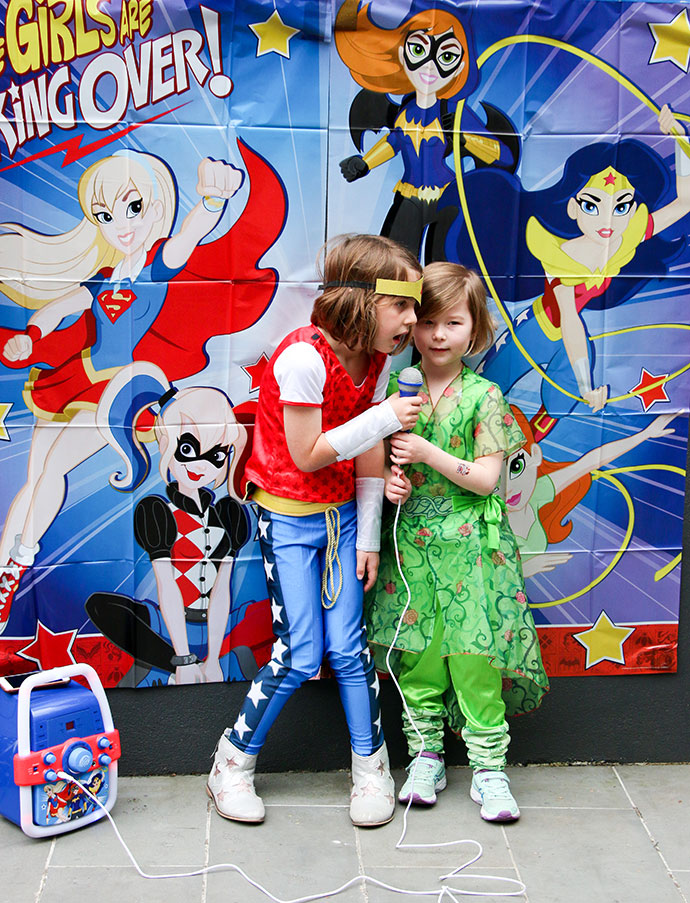 I wanted to keep the party food simple but still themed to the party colours. The food included plenty of healthy options, as well as some sweet party treats. As you can imagine, the sweet treats were the most popular. To keep the sugar levels in check, only plain water was served as the drink option. 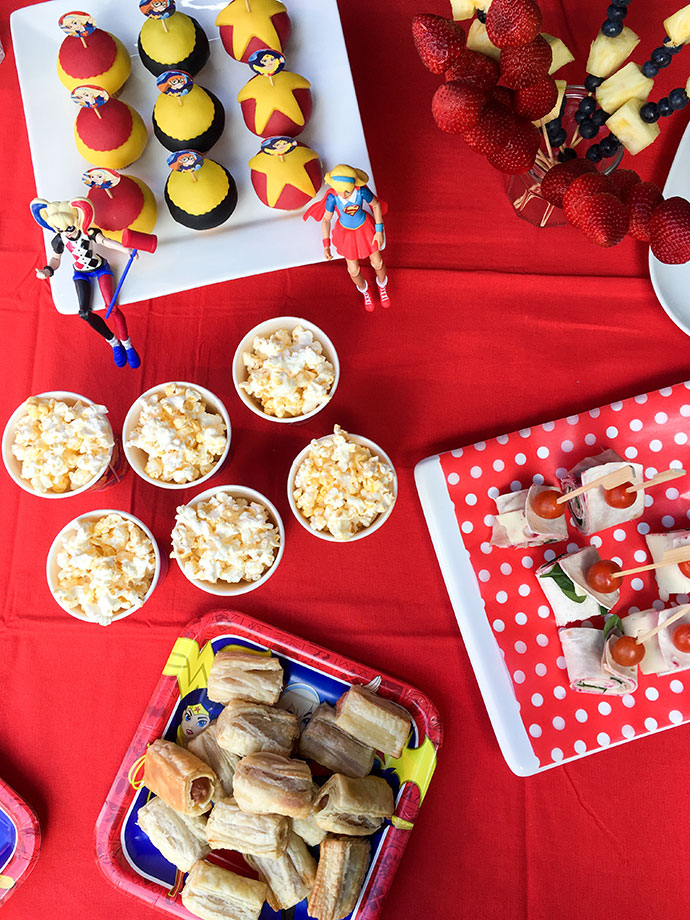 This variation of fairy bread was inspired by Wonder Woman’s star headband. A doddle to make, just buttered bread with yellow sugar sprinkles, cut into star shape with a cookie cutter. 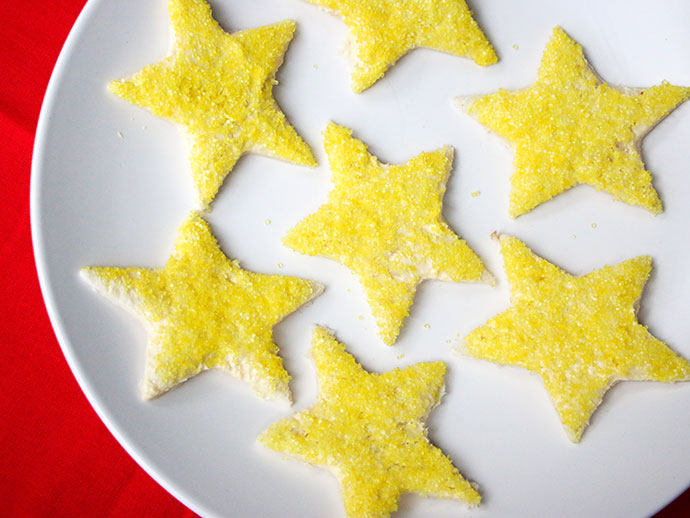 I popped some plain pop corn and served it in individual party themed cups to make it a little more special. 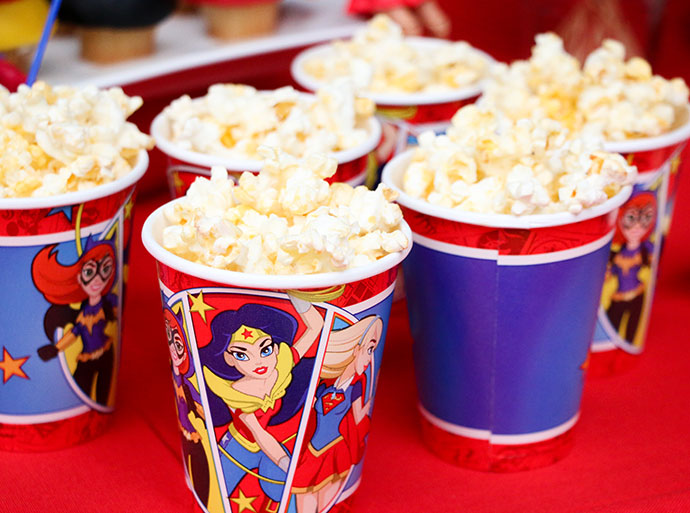 Emma was insistent that I make fruit skewers and I was happy to comply. I used the characters as inspiration. Green grapes for Poison Ivy, Strawberries for Wonder Woman and Pineapple & Blueberries for Batgirl.

I cheated and bought plain vanilla cup cakes, then decorated with some coloured fondant. To make them extra special, I used some cardboard disks that came in the DC Super Hero Girls confetti packs to make cup cake toppers.

Every kid loves jelly, and it’s very easy to make a batch the night before. I chose, blue, yellow and red jelly to theme with the party decorations. 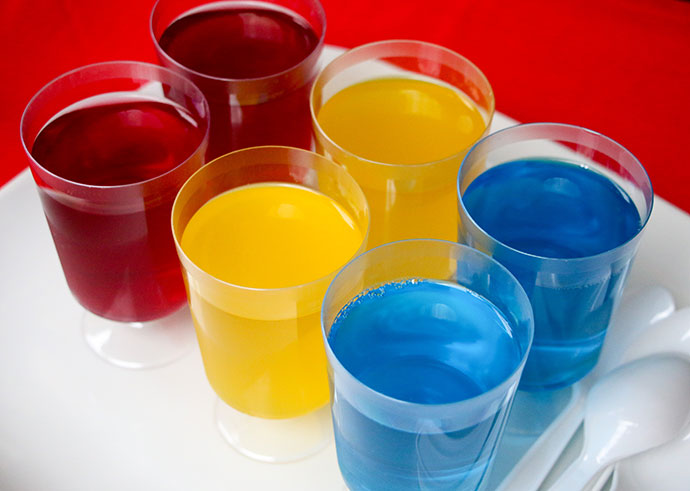 I made a few mini ham and cheese wraps, as well as some mini party pies and sausage rolls as the savoury options. 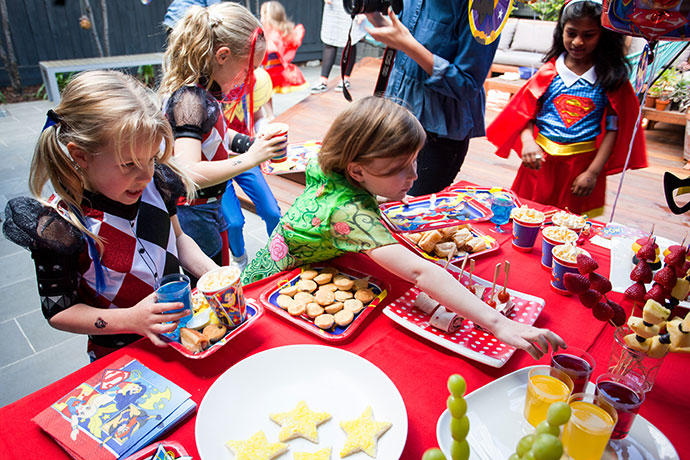 It was really easy to transform my courtyard into the most sparkly DC Super Hero Girls Party venue ever with the help of the scene setter photo backdrop, themed table cover and paper plates and cups, Swirl decorations and balloons. I also added some figurines to the table setting to make it extra special. 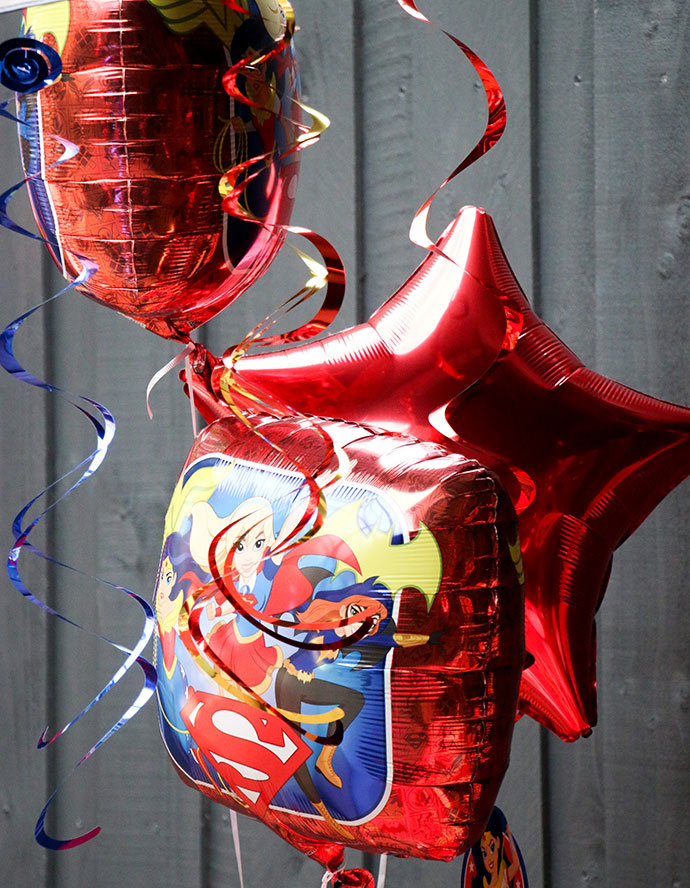 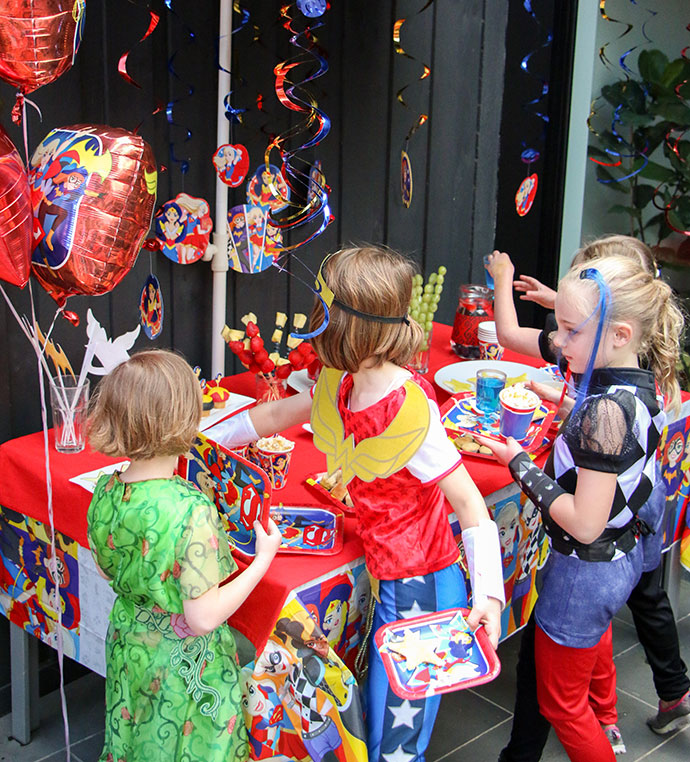 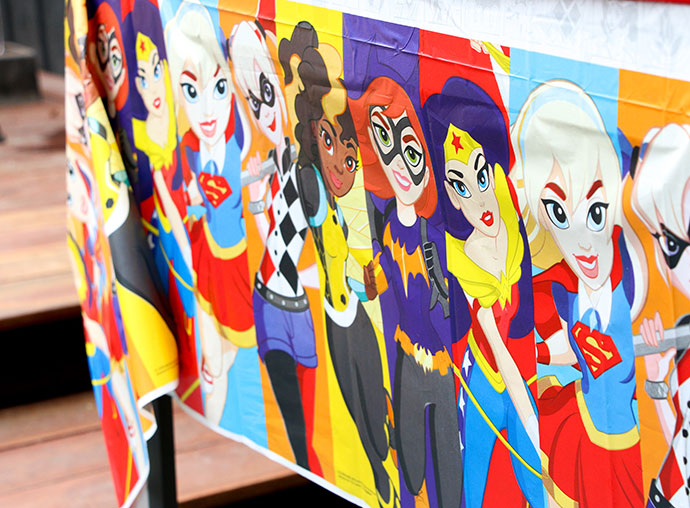 All great parties must come to an end, but not without a loot bag. The girls each took home a gift of a party bag which contained, some DC Super Hero Girls lip gloss, a necklace, rubber bracelets, some extra temporary tattoos, some candy and their very own 6” action figure or book. They also kept their costumes, which I’m sure will provide hours of role playing fun at home. 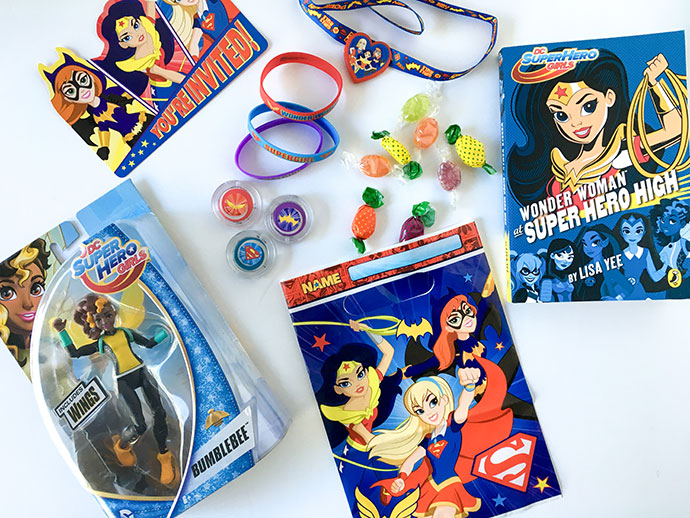 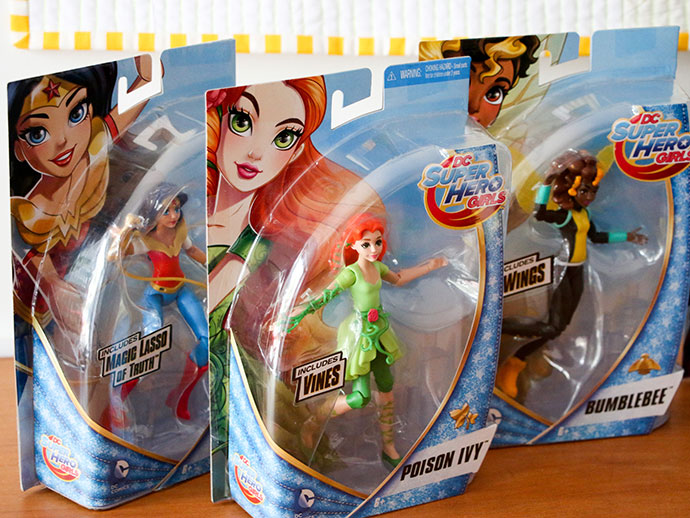 WOW what a day! This is sure to be a party the girls will never forget. I hope I’ve inspired you to organise your very own DC Super Hero Girl party, it was a huge amount of fun and not really much work at all to put together thanks to all the great party ware available at Big W. Toys and tech gear are also available at major retailers. 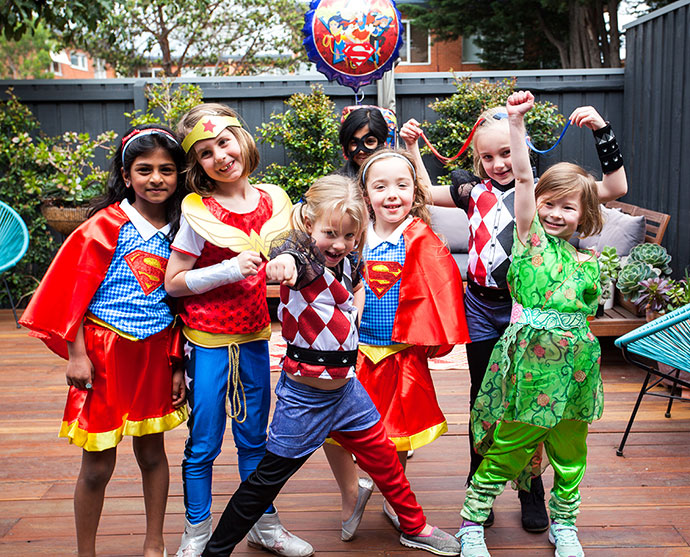