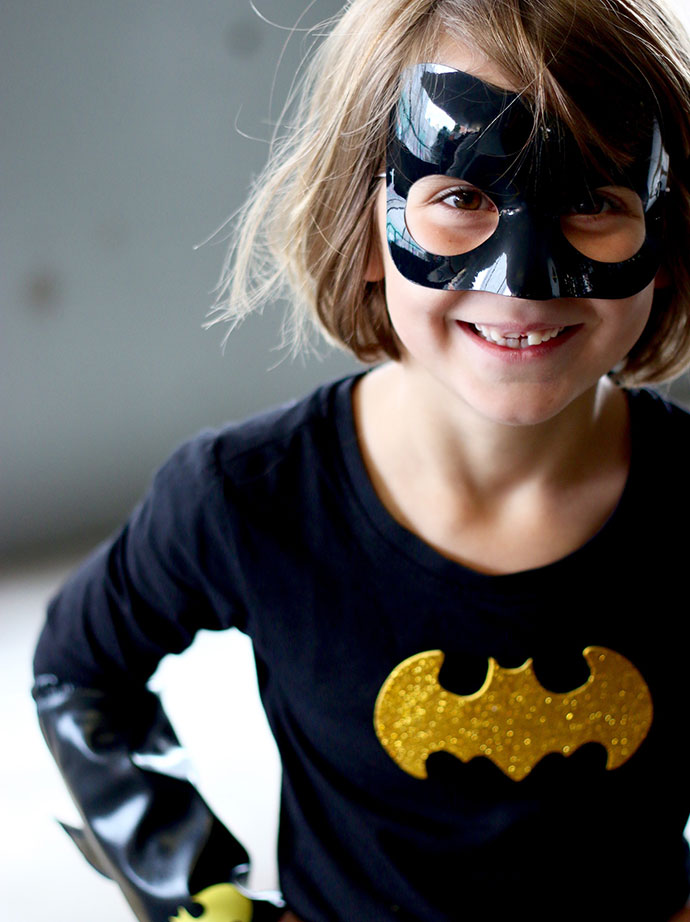 Emma didn’t need much encouragement to dress up in superhero garb today for an event launching a new DC Comics property, the DC Super Hero Girls. I didn’t tell her we were going until yesterday afternoon, which was a mistake on my part because she insisted that I whip her up a movie quality costume quick smart.

She’s always been drawn to villains and hero characters with a dark past, inner turmoil and interesting backstories, (the more obscure the better), so of course her first costume request was Harley Quinn, a super villain in the Batman comics. As crafty as I am, creating a Harley Quinn costume from scratch at 3pm on a Saturday afternoon with a to-do list as long as my arm just wasn’t going to happen, especially since Emma insisted on a blond wig with red and blue ponytails. Sheesh! 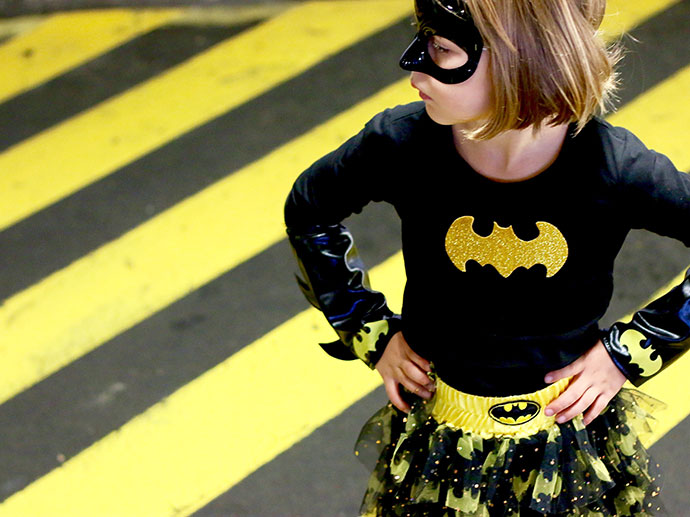 Time for me to use my own super powers of persuasion and sell her on how totally awesome Batgirl is. I mean she is an exceptional detective, super smart, has mad tech skills and lots of cool gadgets like Batarangs. Turns out Emma does like Batgirl too, and conveniently our local Spotlight had some accessories which saved the day.

We had an impromptu photo shoot before the event, the car park provided the perfect gritty backdrop for this vigilante crime fighting rebel with a missing tooth. 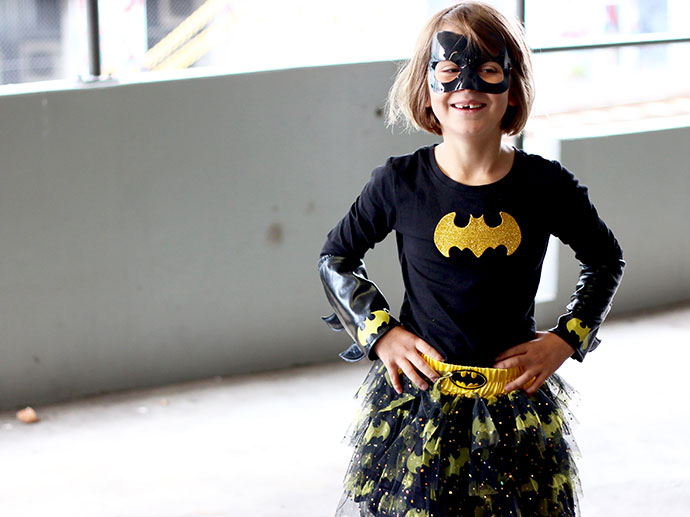 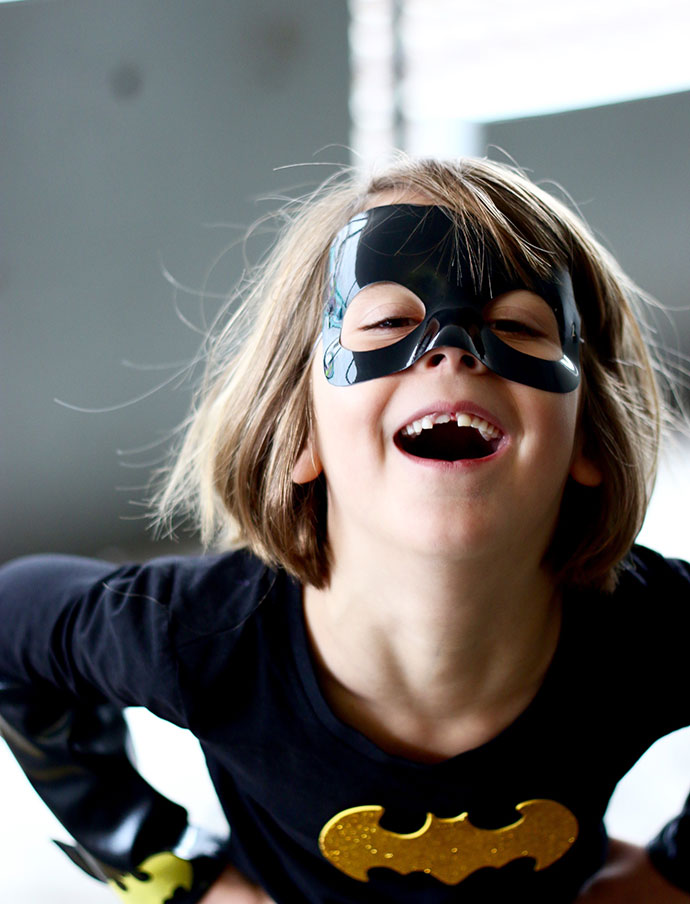 DC is well known for is ‘Multiverse’ comic construct where the same characters can have totally different origin stories, motivations and in the case of DC Super Hero Girls, villains of old can be heroes. In this new incarnation Harley Quinn and Poison Ivy work alongside Wonder Woman, Katana, Bumble Bee, Batgirl and Super Girl for good not evil. 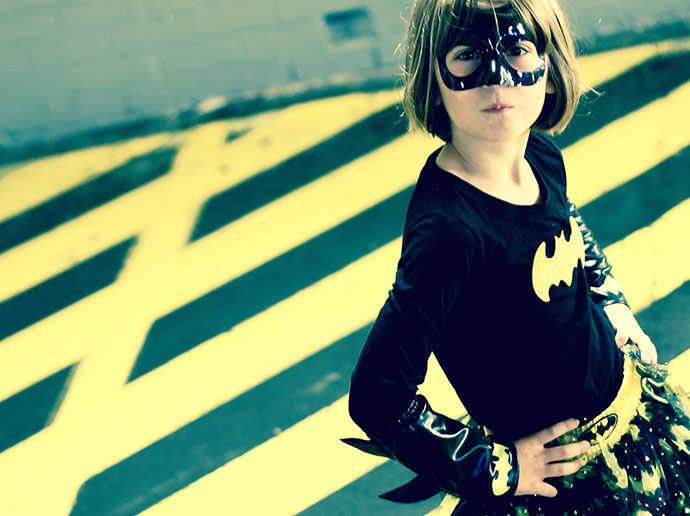 It’s a little bit too saccharine for me, personally I think it’s just as empowering for girls to see themselves not only as heroes, but as villains too. Comic villains and kids’ fascination with the bad guy (or girl) is part and parcel of children’s normal moral development.  They play a role which helps kids work out the difference between right and wrong, and in doing so, help them master each side so they can gain control over things and people they might find scary.

Often the villain’s back story is much more engaging, and just like Emma, I too enjoy characters that are ambiguous in their motivations, it makes me wonder, what happened to make them do what they do? Although I do think it’s commendable to create heroic characters for young girls to feel aligned with, (I loved Wonder Woman as a kid, got the show bag two years in a row), sweetening the very few strong and independent female villains like Poison Ivy, is just reinforcing the ‘Good Girl’ Syndrome.

This article makes an interesting observation on how franchises and toys traditionally marketed at boys are being watered down to make a more pink, girly version.

Girls don’t need a whole new ”girl-powered” universe just for them, they just need to be included in the universe that already exists. 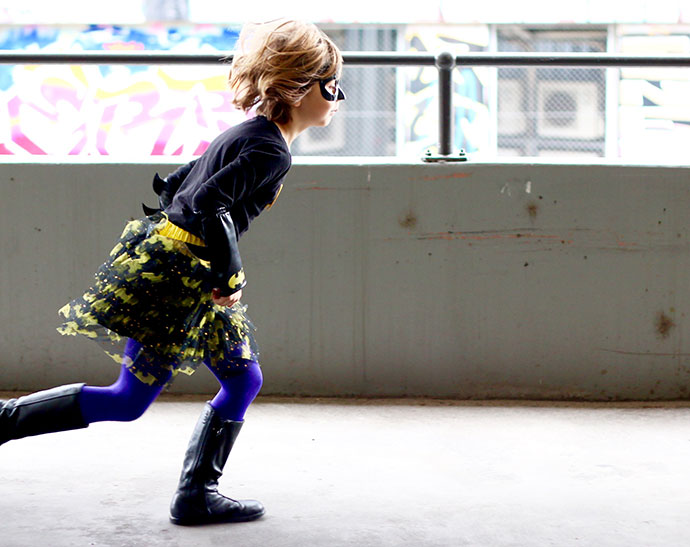 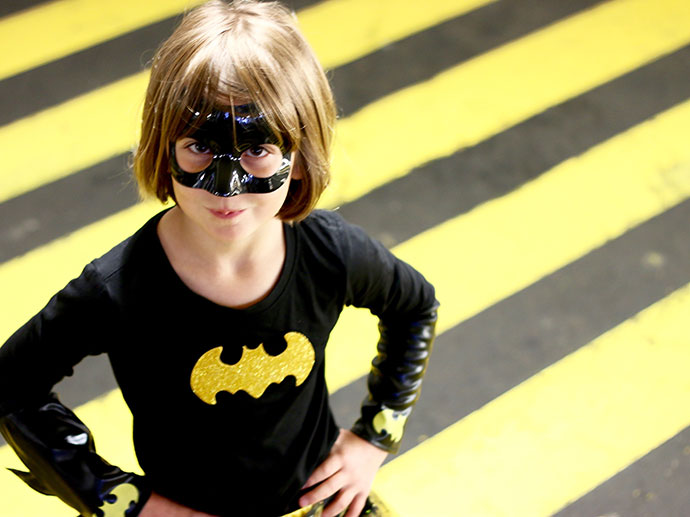 One of Emma’s favorite comic characters is Raven from Teen Titans, (see Emma in Raven Cosplay at last year’s Comic Con). Half demon and half human, she is always balancing the dichotomy within her, it makes for interesting viewing. Being a Teen Titans fan it was fun to see the Beast Boy, Starfire and Miss Martian characters cross over to the DC Super Hero Girls world.

Is the DC Super Hero Girls edgy enough for Emma, probably not, she is already invested in the programs and canon that currently exist, but she still wants the action figures – Harley Quinn please! We only got to see a few previews of the cartoon series, hopefully there will be some deeper character development, more peril and action packed story lines that expand beyond wonder woman failing in costume design class. (Although that would totally be my favourite class in real life) 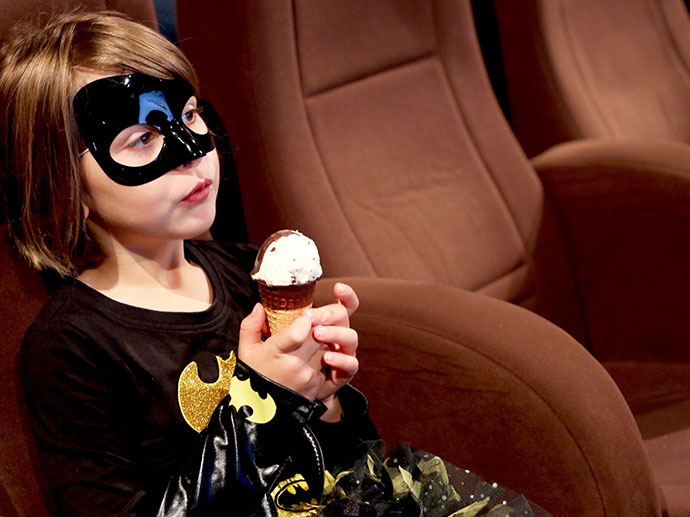 And what about the event?

There was cartoons and choc tops, Martial arts with Katana, Science experiments with Poison Ivy, snacks and games. 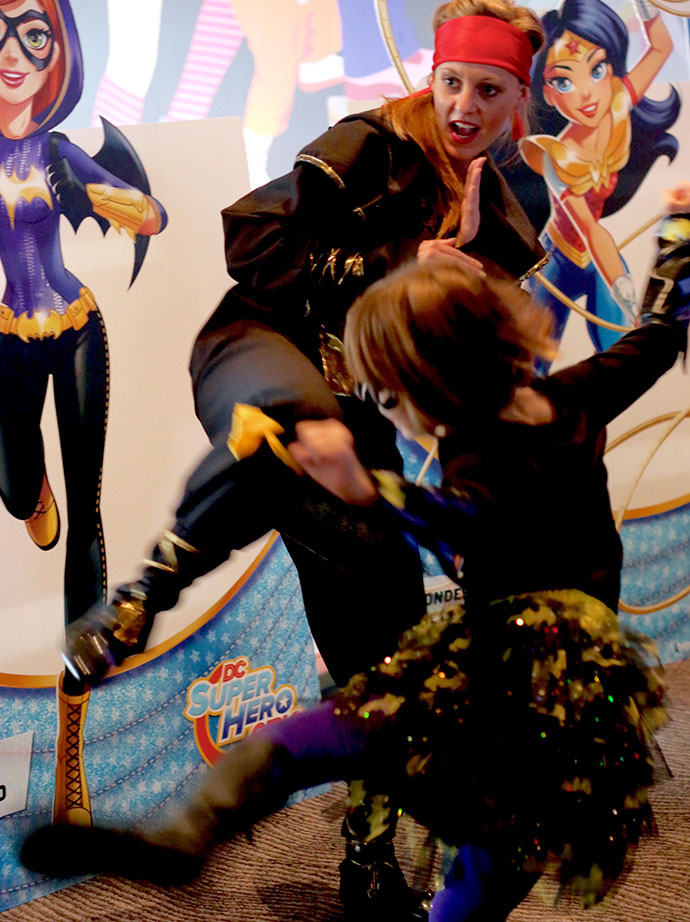 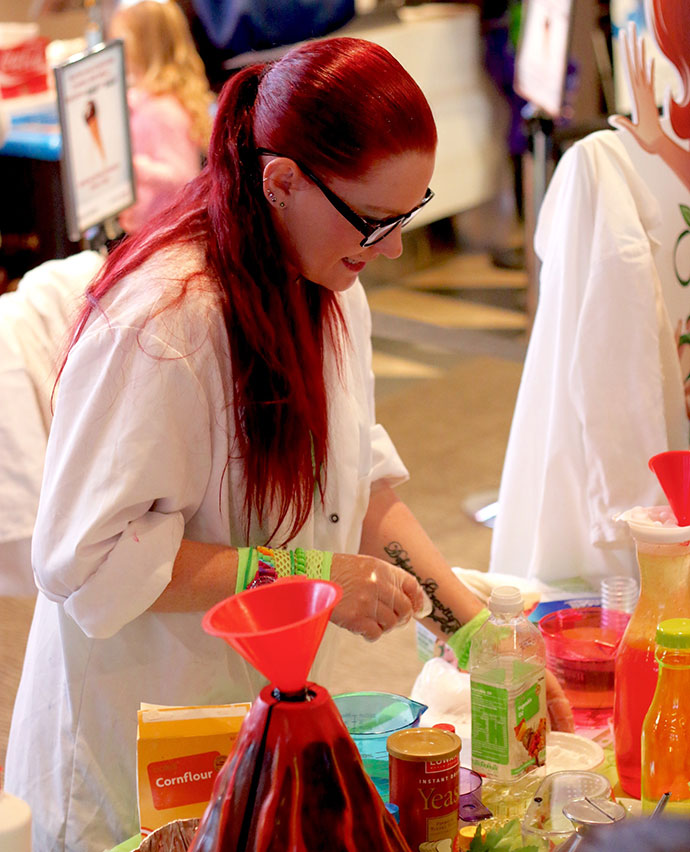 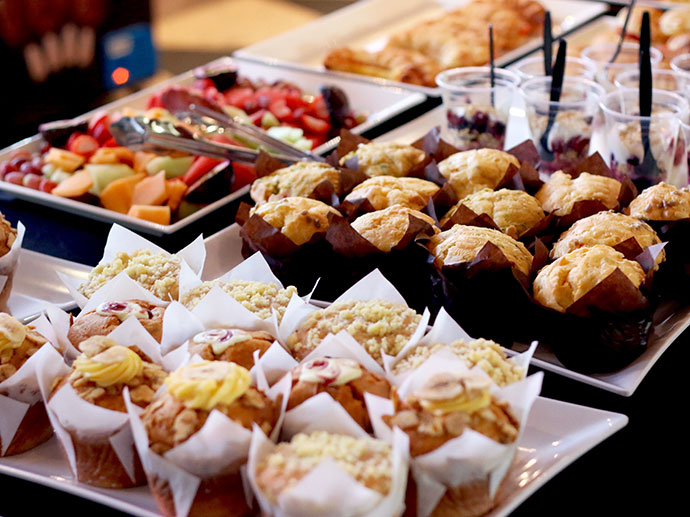 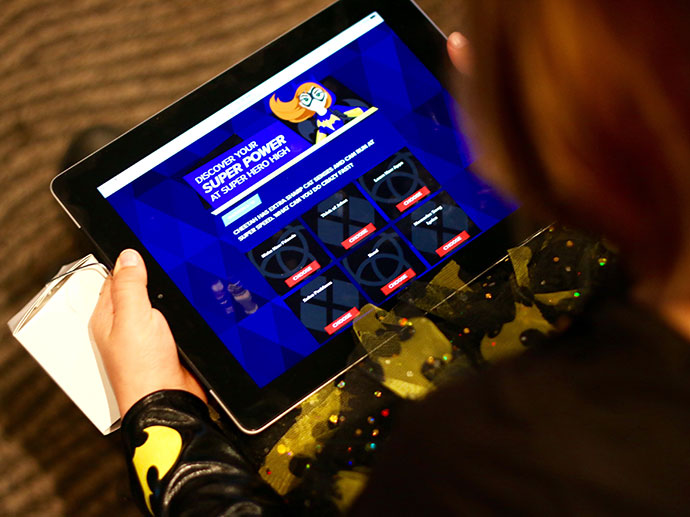 All in all, a fun day out, and of course any excuse to dress up as a caped crusader is gets a thumbs up in my book too.