I’ve joined the gym – A sentence that I thought would never cross my lips. Even more surprised are my friends who are still in shock – apparently I’m the last person that they ever thought would actively seek out physical activity. To be honest, I’m still a little confused by the whole thing myself. 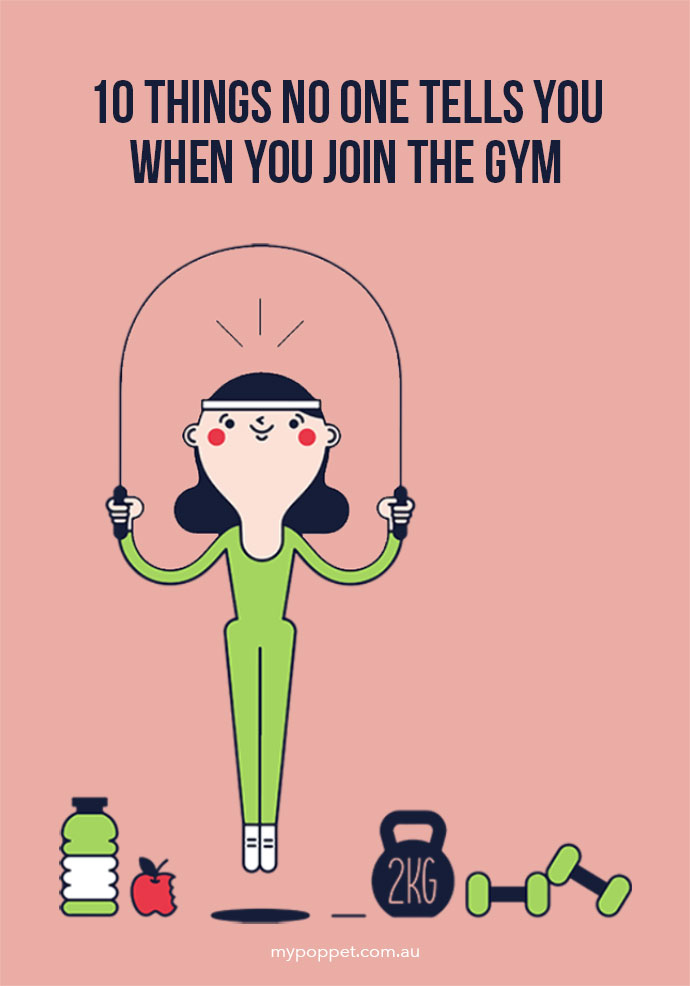 The catalyst for this fitness kick was an upcoming family ski trip to New Zealand. It’s been a hell of a long time since I strapped on the skis, and with a fitness level of about 0%, enjoying a day on the slopes would not have been likely. Best case scenario, I fall over and can’t get up, worst case, I seriously injure myself.

So with the hope of preventing major damage to my person, I headed into my local gym about a month ago and signed on the dotted line, even booked in some personal training sessions to kickstart my fitness journey (insert eye roll here).

The membership guy was all too happy to show me around, tell me what a great decision I was making, and get my direct debit details locked in before I changed my mind.

But I was soon to discover that gym contracts are pretty vague, there’s a ton of stuff they just don’t tell you about when you sign up to the gym.

Forget about cooling off periods and membership rollover dates, here’s what really should be on every gym membership signup form:

10 things no one tells you when you join the gym

No, I’m not talking about your favourite local pizza place. DOMS, better known as Delayed Onset Muscle Soreness will leave you feeling like you’ve been hit by a truck. That BODYPUMP® class may have seemed like a good idea at the time, but you’re sure to regret it the next day when you can’t walk, sit on the toilet or lift your arms without wincing a little. Get used to DOMS, it’ll be rearing it’s ugly head again soon enough.

Guess what? Turns out that you didn’t have enough things to feel guilty about in your life, so why not throw ‘feeling guilty for not going to the gym’ into the mix too. Like regular ‘Mum Guilt’ wasn’t already enough to deal with!

3. You eat ALL the carbs

After a session at the gym you will become an eating machine. Make sure you stock up on some healthy snacks otherwise you’ll literally be cleaning out the pantry of anything you can find, the ‘carbier’ the better. I’ve been known to make a whole sleeve of biscuits disappear in the blink of an eye. If you step on the scales and your weight goes up, you can always comfort yourself with the well known fact (myth) that muscle weighs more than fat. Did somebody mention pizza earlier?

4. Your current underwear is useless

It will soon become apparent that what you thought was perfectly serviceable underwear just isn’t going to cut it. Undies will ride up and bra elastic will fail miserably. The need for a decent sports bra will become a number one priority.

5. You’ll start buying clothes with ‘Performance’ in the description

Turns out if you add ‘performance’ to a clothing label you can charge double, and still you’ll happily hand over your cash in hopes that some of the performance will rub off.

6. Wearing leggings as pants will become an acceptable fashion choice

Mainly because you paid so much money for said ‘performance wear’ that you really need to get your money’s worth, (cost per wear and all that). But most likely because you can’t be arsed changing cos you’re too damned tired after Zumba.

Everything you wear to the gym will stink, and your laundry pile is going to double. Better buy a few spare pairs of performance undies, because no matter how much gym gear you’ve got, you’ll never have enough clean training clothes.

8. You’re showering schedule will get messed up

If you are a morning shower person the whole gym thing will really throw your routine. I mean do you have your regular shower and then another one after a workout? Seems like a waste of water to me. But leaving the house un-showered feels a bit gross. I’m still trying to work this one out.

9. Say goodbye to half your day

There’s no such thing as a quick workout. Factor in stretching out properly to prevent DOMS, that extra shower and then eating all the food, and the whole morning’s gone. You’ll be too tired to do anything else, but hey, at least you can cross of ‘go the the gym’ off your To-Do list.

Get used to the change of lifestyle that points 1 to 9 entail, because you’re going to be a gym member for at least 12 months. It’s almost harder to extricate your self from a gym contract, than get a marriage annulled by the pope.

So there you go, forewarned is forearmed.

Now I’m off to ponder my next question: Do you take your handbag to the gym?