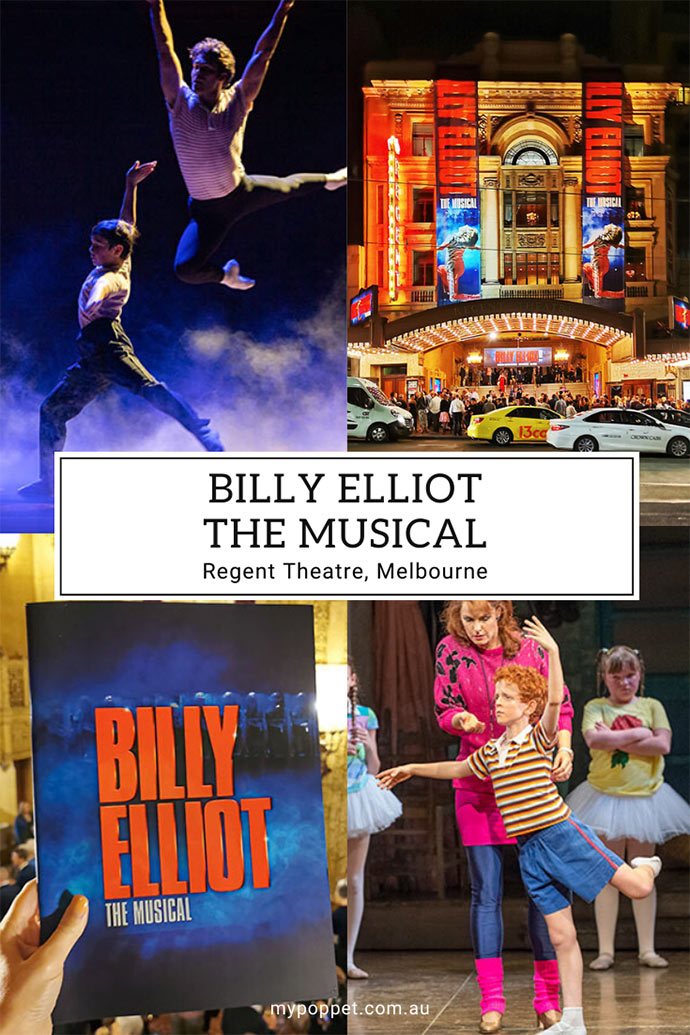 Based on the film of the same name, Billy Elliot The Musical is a funny, gritty, heart-warming and feel-good celebration following the journey of a young boy raised in a small British mining town.

Set against the backdrop of the 1984/’85 miners’ strike, Billy’s journey takes him out of the boxing ring and into a ballet class where he discovers a passion for dance that inspires his family, the whole community and changes his life forever. 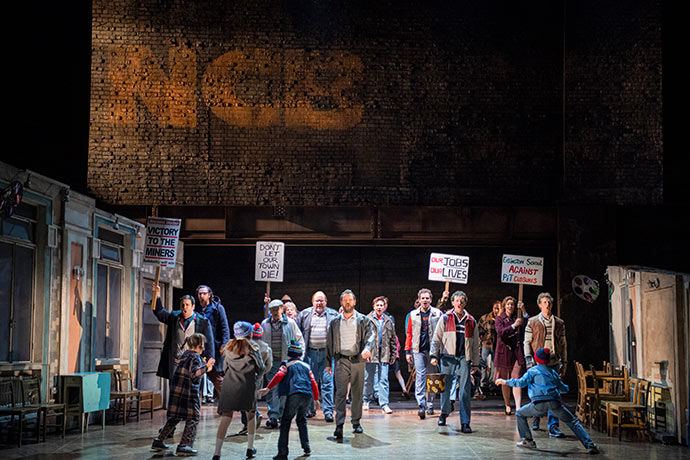 Emma and I were delighted to be offered the opportunity to review this a Tony Award winning musical, and experience it for ourselves at Melbourne’s spectacular Regent Theatre.

It was Emma’s first time at the Regent, and the opening night buzz was infectious. 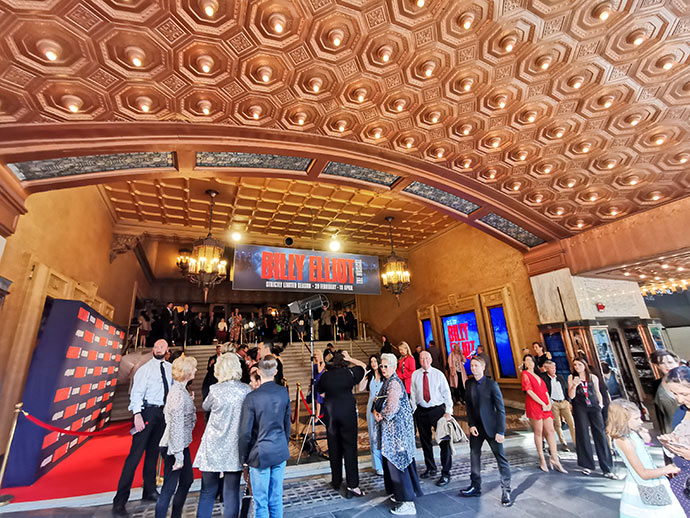 We did spot some celebrity guests, but Emma was most excited about seeing some of the multiple actors that play the lead role of Billy Elliot. We thought they were just there to support their fellow cast on opening night, but to our surprise, all of the kids that share rolls in the musical, took a bow at the end of the show.

Four boys share the lead role of Billy Elliot in this production: Omar Abiad (12, from Brisbane), River Mardesic (11, from Melbourne), Wade Neilsen (13, from Newcastle) and Jamie Rogers (13, from Canberra). The boys were cast following extensive auditions, and after months of intensive rehearsals will alternate in the role of Billy in the Australian tour of Billy Elliot the Musical.

River Mardesic was playing the role of Billy in our performance, and I was blown away by the level of talent of this 11 yo. 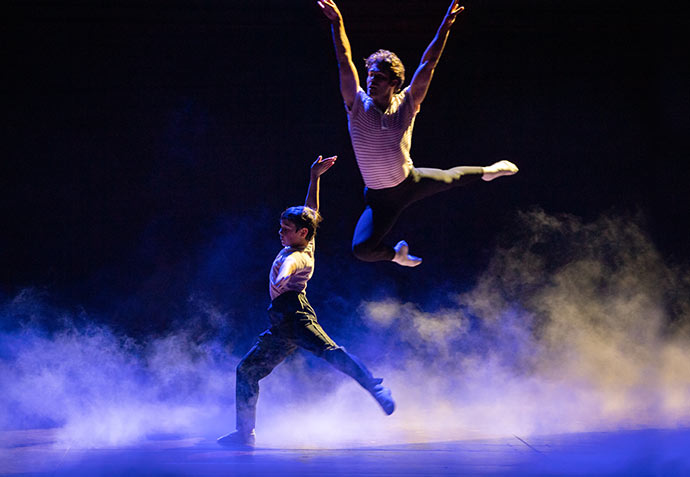 The show opens with a Pathé style newsreel projected onto the stage, explaining the unrest surrounding the miners’ strike and political unrest of the time.

It helps explain the background tensions, especially to audience members who may not have seen the original movie.

I’d recommend purchasing the show program which contains quite a good article about the history of the coal miners’ strikes, and how Margaret Thatcher’s hard line stance against the unions escalated violence and destroyed the British coal industry, along with the working class communities that relied on it. 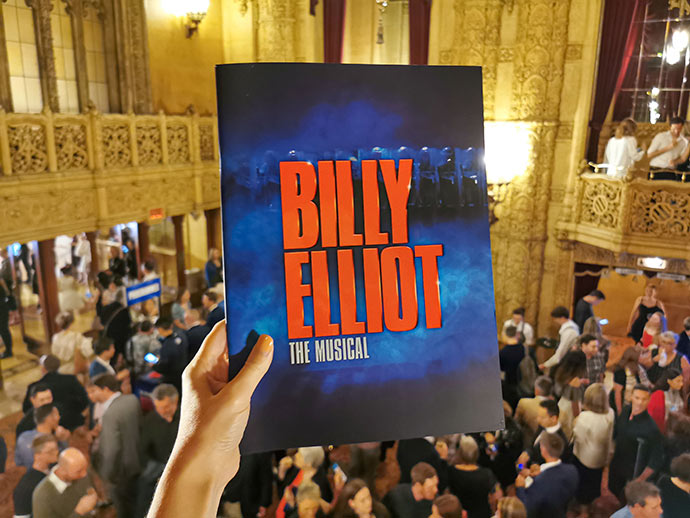 The show does a good job of interpreting the original story, injecting it with more humor and fantasy scenes than the movie. It still has some quite dramatic moments, but over all the tone is much more upbeat than the movie.

Of course there’s a lot of dancing, including a number where the strikers, police and ballet class are all on stage at the same time. It’s a very dynamic performance, and really captures the difficulty of creating normalcy and moments of joy for children living in such a chaotic environment.

Set in the north of England, the actors do quite a good job of speaking and singing with a ‘northern’ accent, but you’ll need to attune your ears, as the dialog comes thick and fast, with plenty of swearing thrown in. Even the kids drop some choice curses! 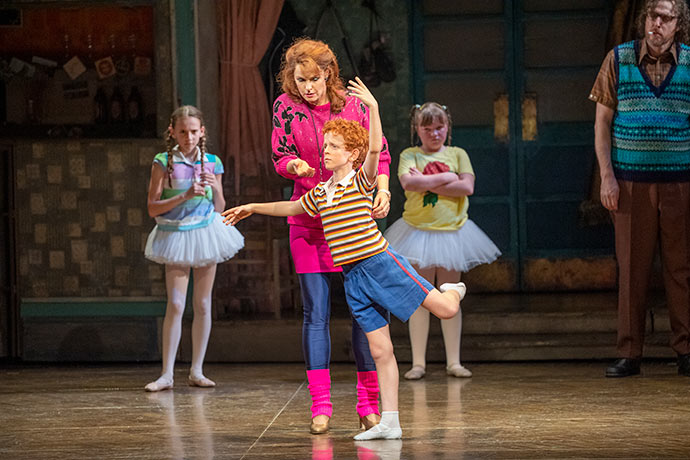 Lisa Sontag lights up the stage as ballet teacher Mrs Wilkinson, who encourages Billy to pursue his love of dance, and several of the most memorable scenes are touching moments between her and Billy, including duet ‘The Letter’, where they read/sing a letter from Billy’s late mother. 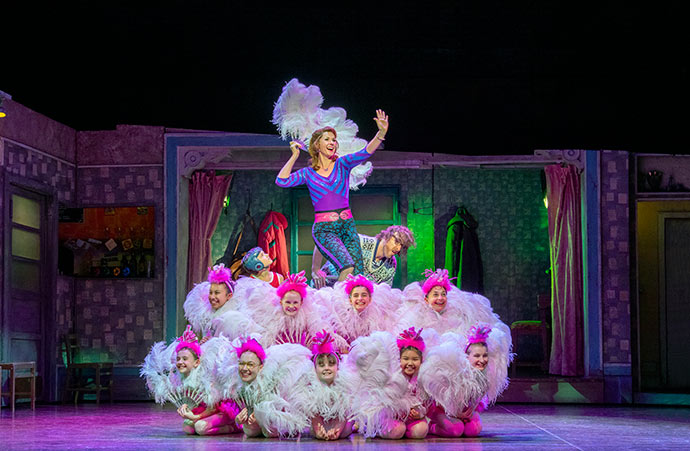 Mrs Wilkinson’s lurid 80’s outfits are also a fun contrast to the dour work-wear the rest of the cast wear.

Billy Elliot The Musical does a fantastic job of interspersing humor, frivolity and joyful dancing, with moments of drama, tension and pathos.

The whole cast is incredibly talented, but River Mardesic as Billy, stole the show with his incredible breadth of dancing talent. Both his ballet and tap performances were faultless and full of passion. He can also sing beautifully and pull off a passable accent. This kid is going places. 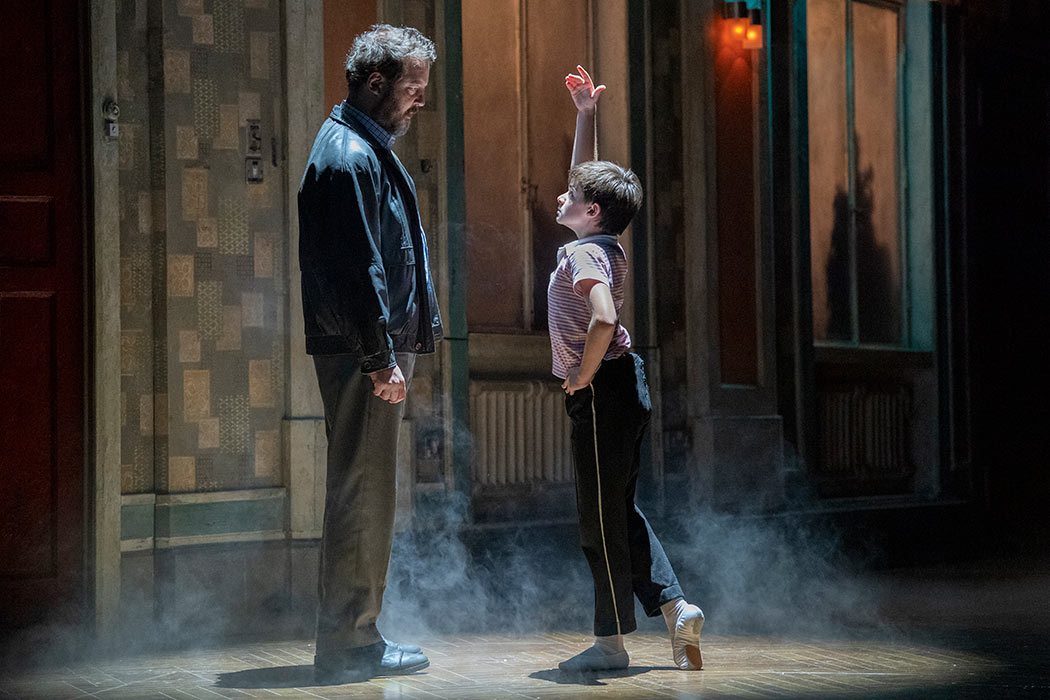 The music music by the legendary Elton John, book and lyrics by Lee Hall (the original movie screenwriter) aren’t ear worms, but did a good job of moving the story along. Personally I would have been happier with fewer musical numbers, and more acting scenes, but I really love the grittiness of the original movie, so that probably plays a part in my thoughts on that.

Emma actually loved the over-the-top numbers. One with giant anthropomorphized dresses was really a highlight. 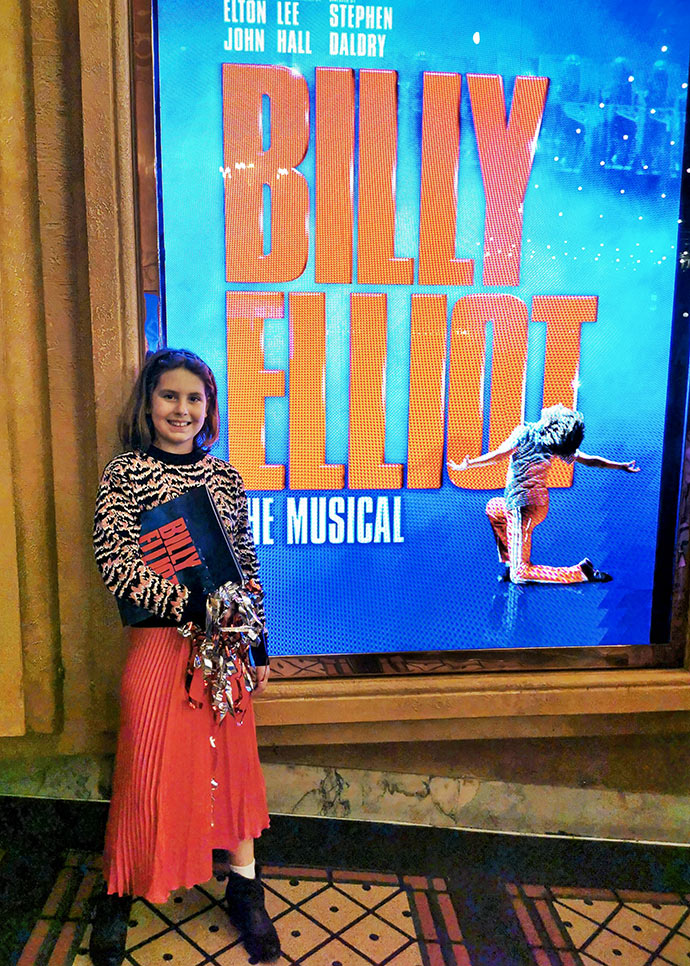 Is Billy Elliot The Musical suitable for children?

I’d recommend this show for kids 10 yo and over.

Emma and I watched the movie together before seeing the show, so she would understand the background drama regarding the strikes, picket lines, trade unions, and who Margaret Thatcher was. I think it’s important for kids to understand political and class challenges Billy’s community faces to really grasp the exceptionality of Billy’s journey.

There is quite a bit of swearing, references to domestic violence and police brutality, some fighting scenes on stage, and a scene where Billy’s brother Tony has blood running down his face after being beaten by police (off stage). There is also a lot of onstage smoking.

It’s also quite a long show for younger kids to sit through, lasting for 2 hours 55 minutes with a 20 minute interval. 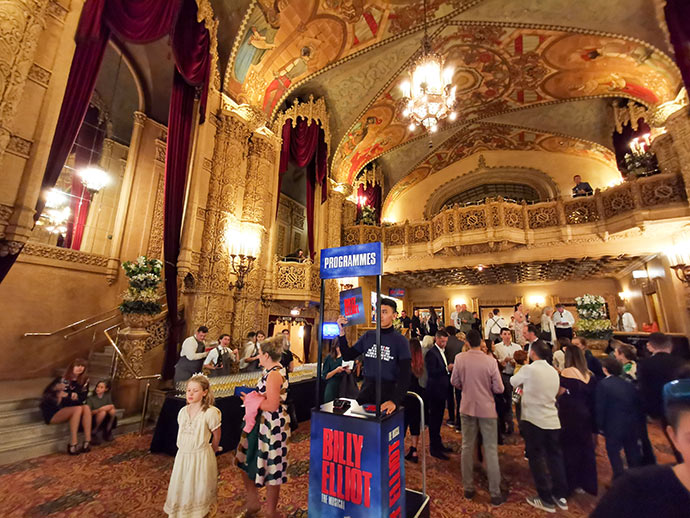 Our Verdict of Billy Elliot The Musical, Melbourne

We both really enjoyed Billy Elliot The Musical, Melbourne. It’s a heartwarming show with incredible choreography, talented performers and at a beautiful theatre to boot! Go see it! 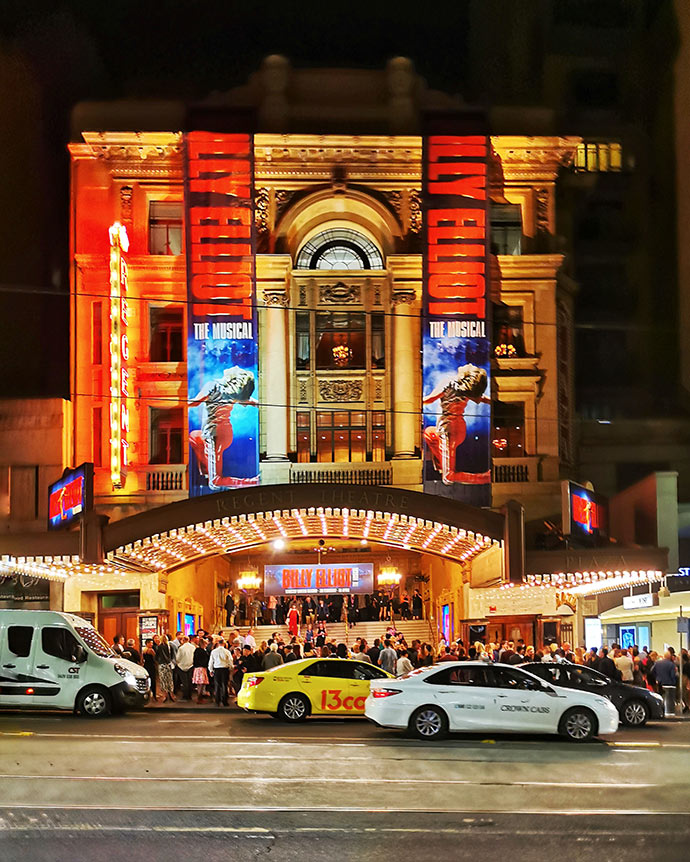 Billy Elliot The Musical is now playing at Melbourne’s Regent Theatre till the 19th April 2020 . Buy your tickets here.