Known as the man who made sculpture move, Alexander Calder was one of the most in influential and pioneering figures of modern art in the 20th century. 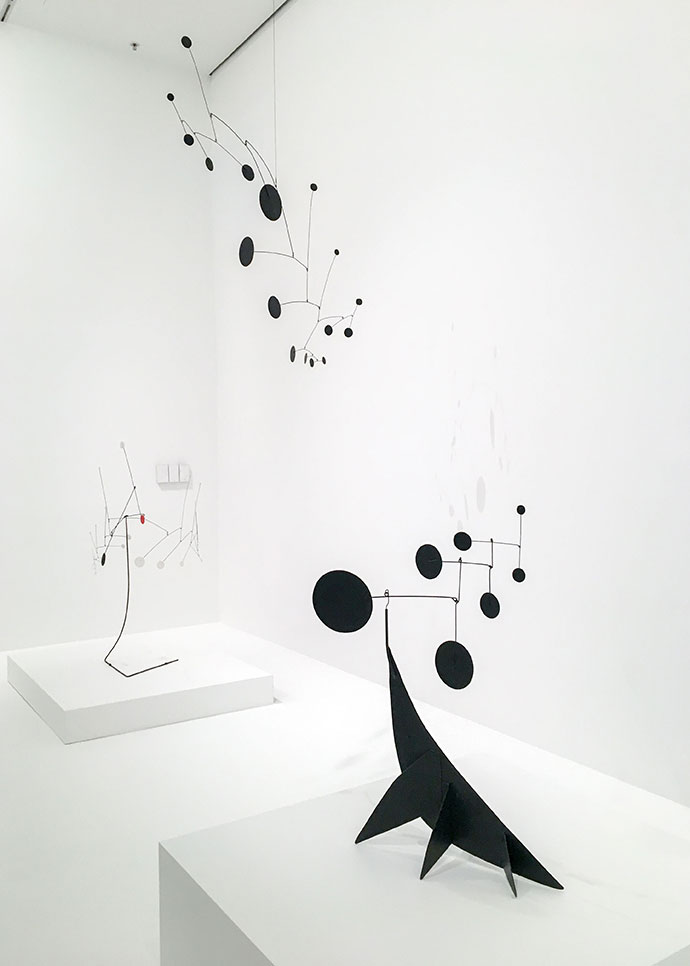 You may have seen his iconic mobiles hanging in galleries all over the world including at the NGV as part of last year’s Winter Masterpiece Exhibition MoMA at NGV. 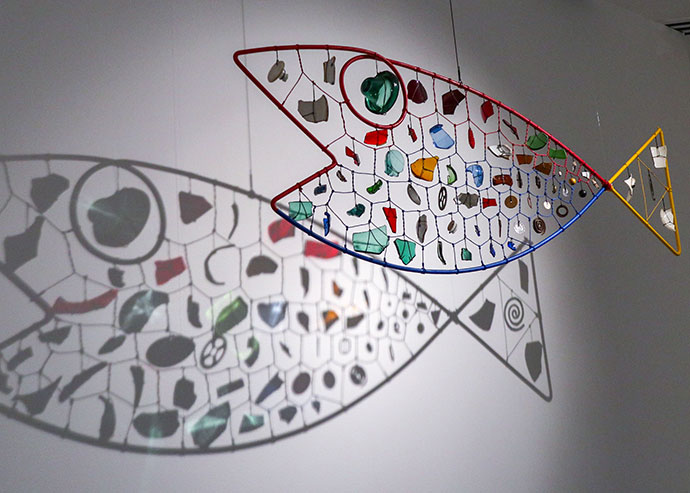 It’s incredible to think that Calder invented the concept of moving sculptures and the name ‘Mobile’ was coined for them by Marcel Duchamp in 1931, which in French suggests both movement and also a ‘motive’. The noun ‘Mobile’ soon entered common usage to describe suspended sculptures, appearing in Webster’s New International Dictionary in 1954. 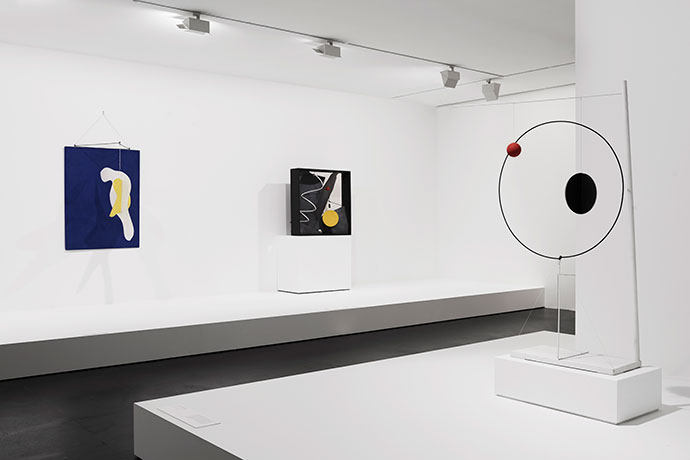 Before this exhibition, it didn’t even cross my mind that ‘mobiles’ were a recently invented thing.

Alexander Calder: Radical Inventor, is showing at NGV International from 5 April to 4 August 2019, and features nearly 100 works spanning the artist’s career, ranging from early childhood sculptures, avant-garde innovations, large-scale objects from the last chapter of his career in the 1970s, and an impressive display of Calder’s most iconic forms: suspended mobiles. 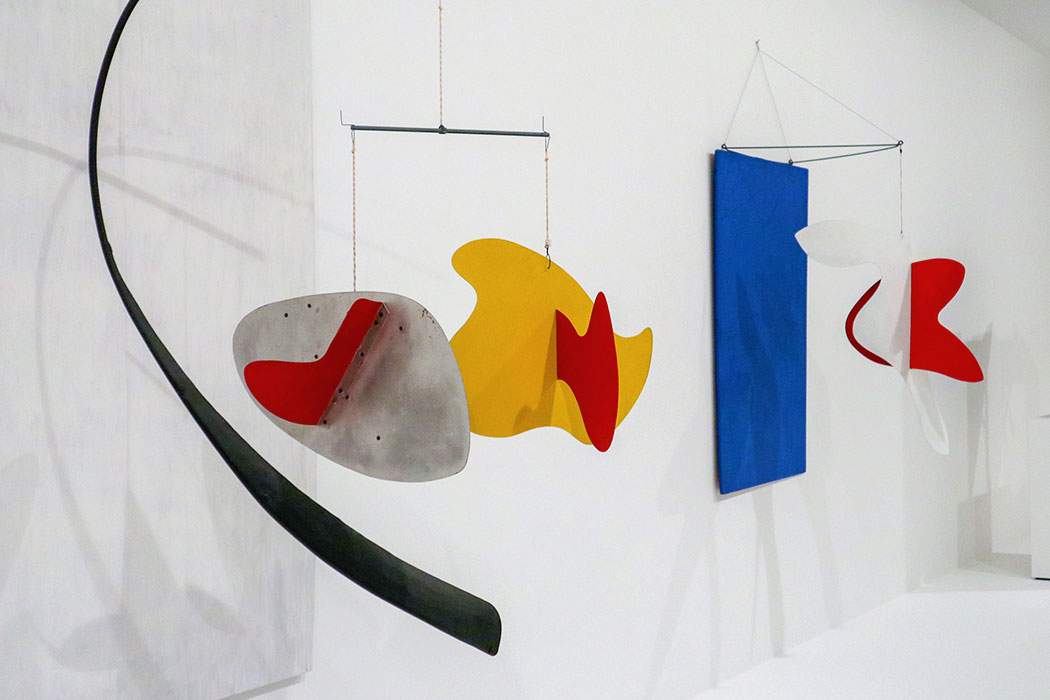 Displayed in a stark white exhibition space, the graphic shapes, lines and shadows of Calder’s sculptures are striking. The gentle movements of the mobiles are almost mesmerizing as the air blown from the gallery’s air conditioning vents provide just enough breeze. 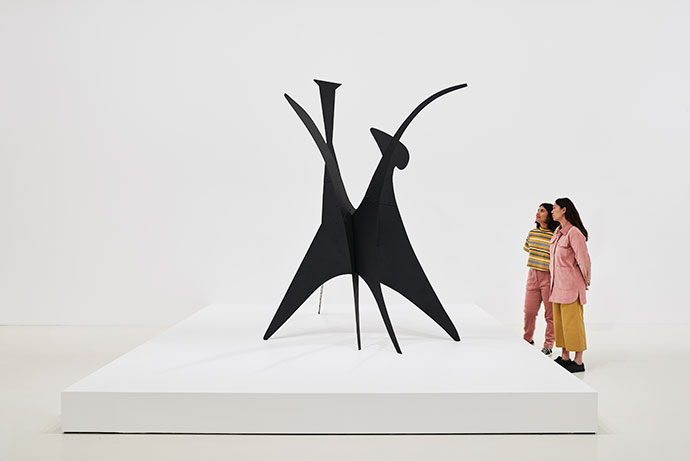 I’d encourage you to visit during a quite, time if at all possible, to get the full effect of the pops of colour, and subtle movement in the vast gallery space.

Calder’s early inventive work with metal and wire, creating whimsical and useful objects was delightful and really showed how truly innovative he was for his time.

His three-dimensional wire sketches are incredible,  The Brass Family, 1929, a wire sculpture of balancing circus performers was the highlight of the exhibition for me. 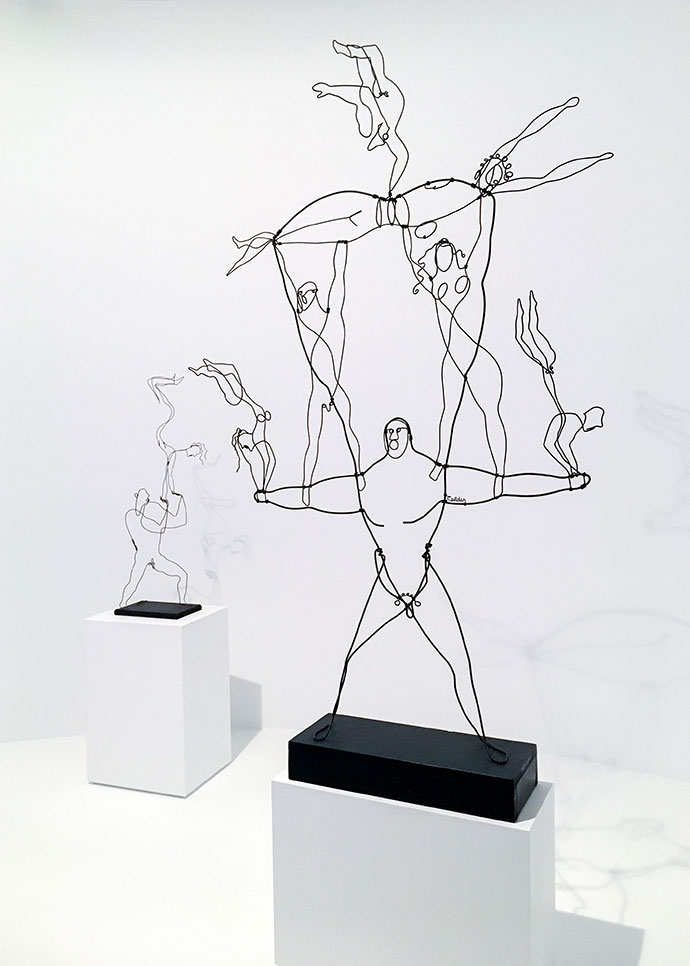 This exhibition has been organised in collaboration with the Montreal Museum of Fine Arts in Canada. Bringing together sculpture, drawing, painting, jewellery and other media from North American art museums and private collections, including generous loans from the Calder Foundation, New York. 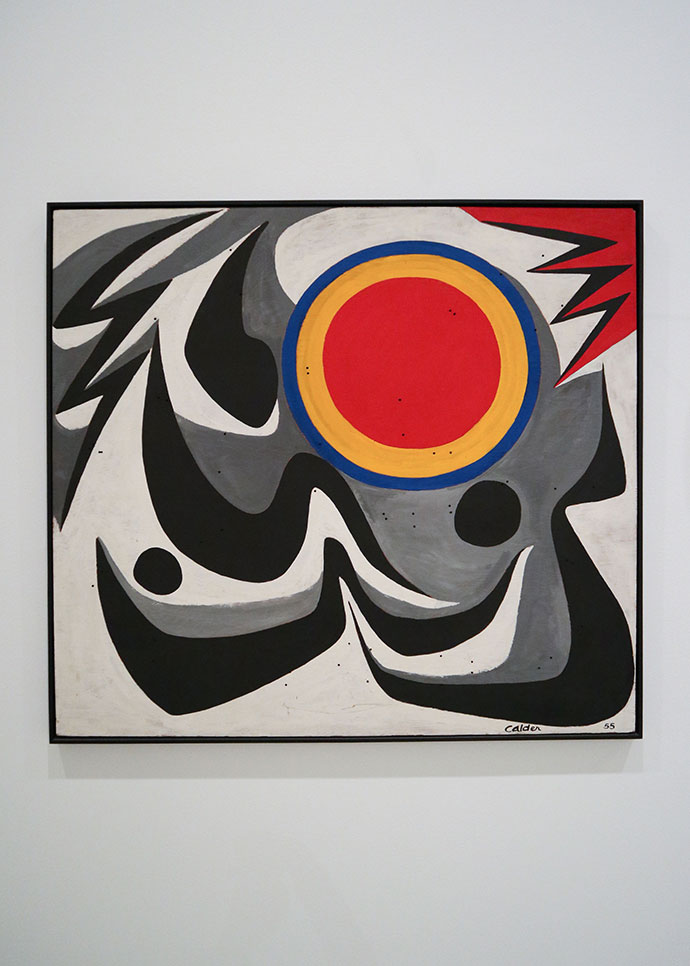 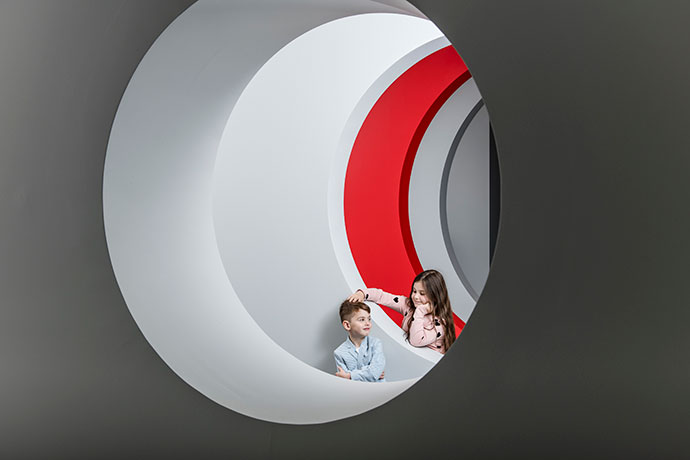 Tiger (5) and Cherry (8) in the exhibition Alexander Calder: Workshop for Kids at NGV International from 5 April – 4 August 2019 Photo: Eugene Hyland

The kid’s activity space’s minimal design is dominated by a striking entrance of concentric circles which take their cue from many of Calder’s mobiles and sculptural pieces which feature circles. 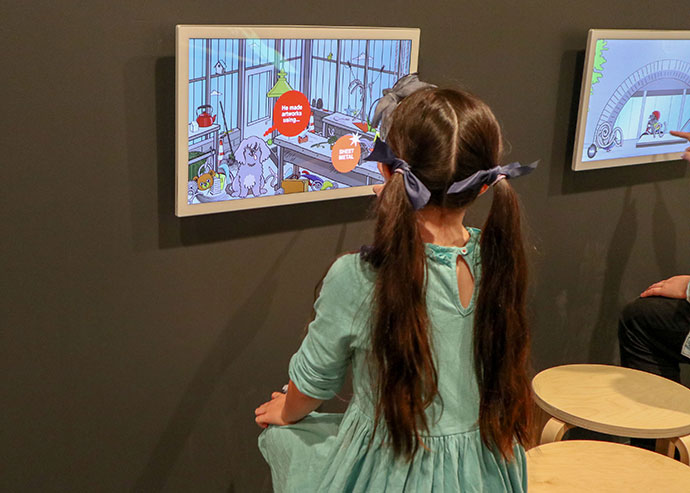 Alexander Calder was captivated with movement and animals even as a child. At age 11 he gifted his parents with sculptures he had made of a dog and a duck.

Taking inspiration from this fascination, Alexander Calder: Workshop for Kids presents children with the opportunity to construct their own unique creatures. Using custom-designed paper templates, kids (and adults) can work with
intersecting shapes and folding techniques to build animal sculptures that can be customised with their own designs.

Cut-outs are mixed and matched to create a variety of creatures, all inspired by Calder’s metal work sculptures. 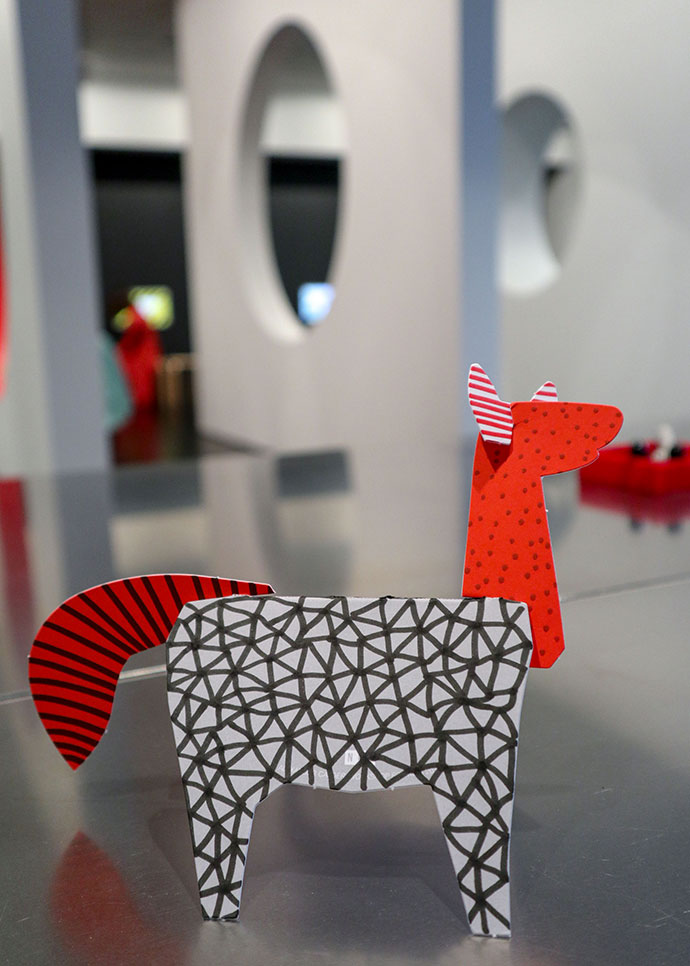 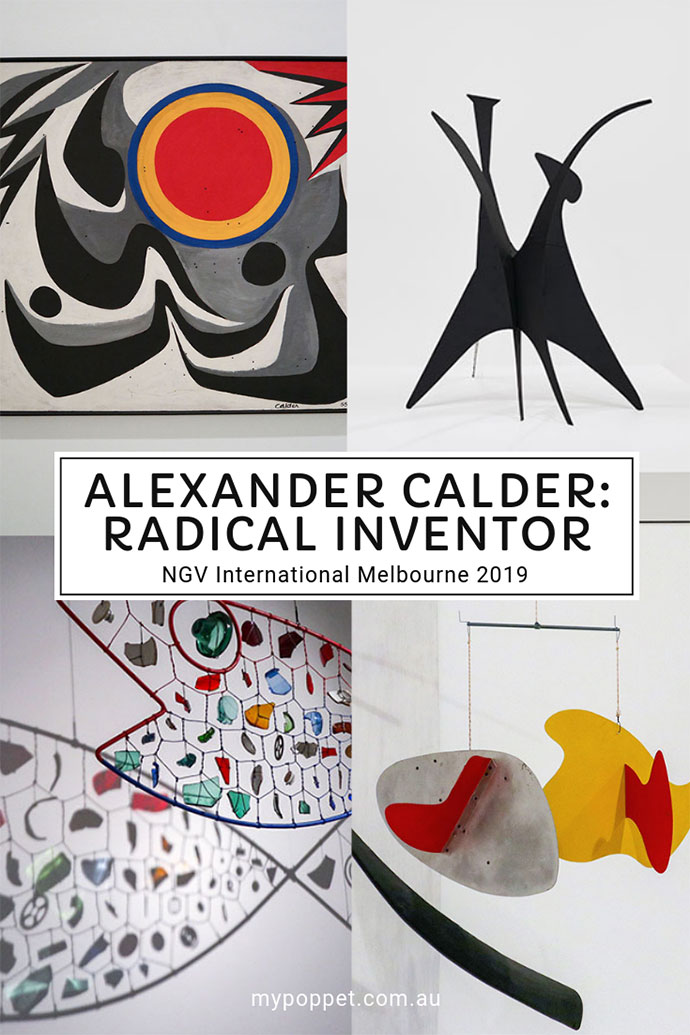