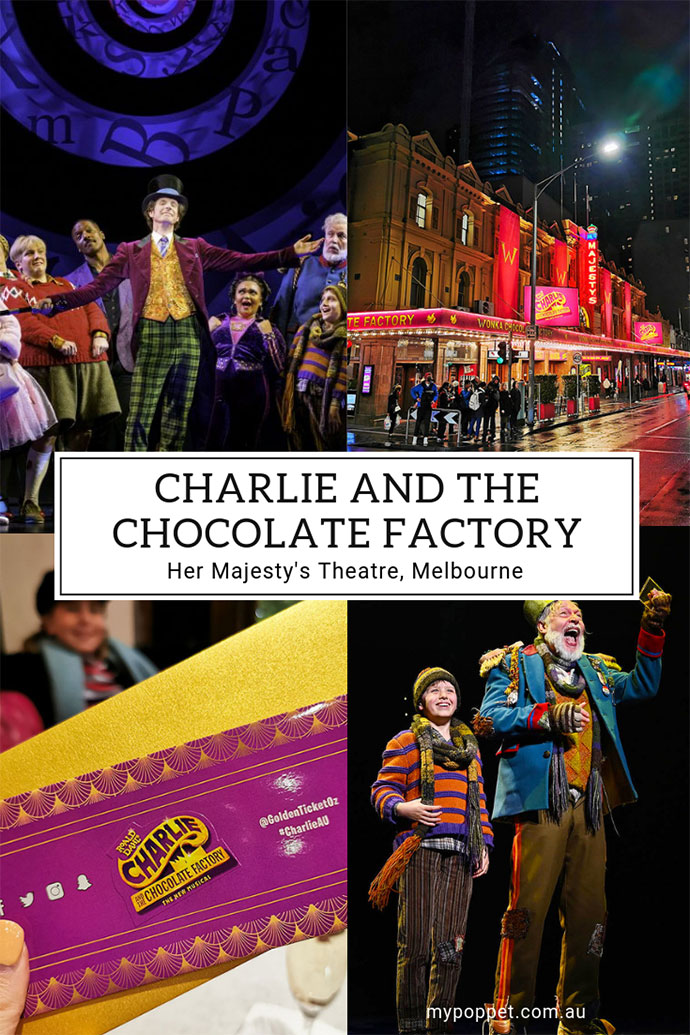 When Emma and I were offered to review the new musical, Roald Dahl’s Charlie and the Chocolate Factory, we felt like we’d won a Golden Ticket! Melbourne winter’s can be so long and cold, so a trip to the theater is always great way to brush off those winter blues. 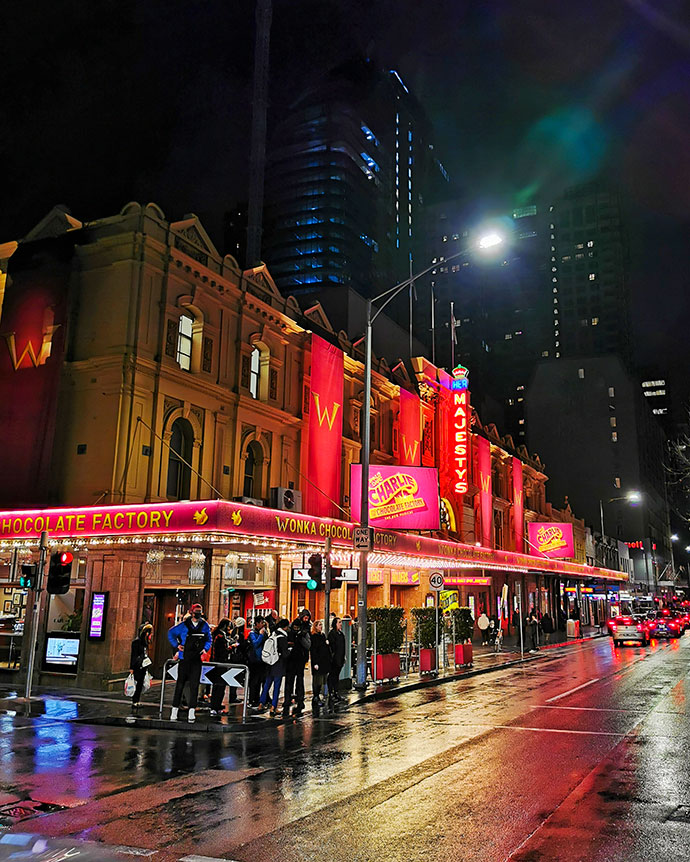 Charlie and the Chocolate Factory is one of our favourite Roald Dahl books, and with two well loved movie versions, it’s always interesting to see new interpretations of this well-known and well-loved story.

We follow the story of poor Charlie Bucket, who’s struggling family can only afford to buy him one chocolate bar a year on his birthday. Charlie lives with his mother and his four grandparents in a little wooden house, and seems to strike it lucky when he is the final child to find a Golden Ticket and win a tour of the Wonka Chocolate Factory. 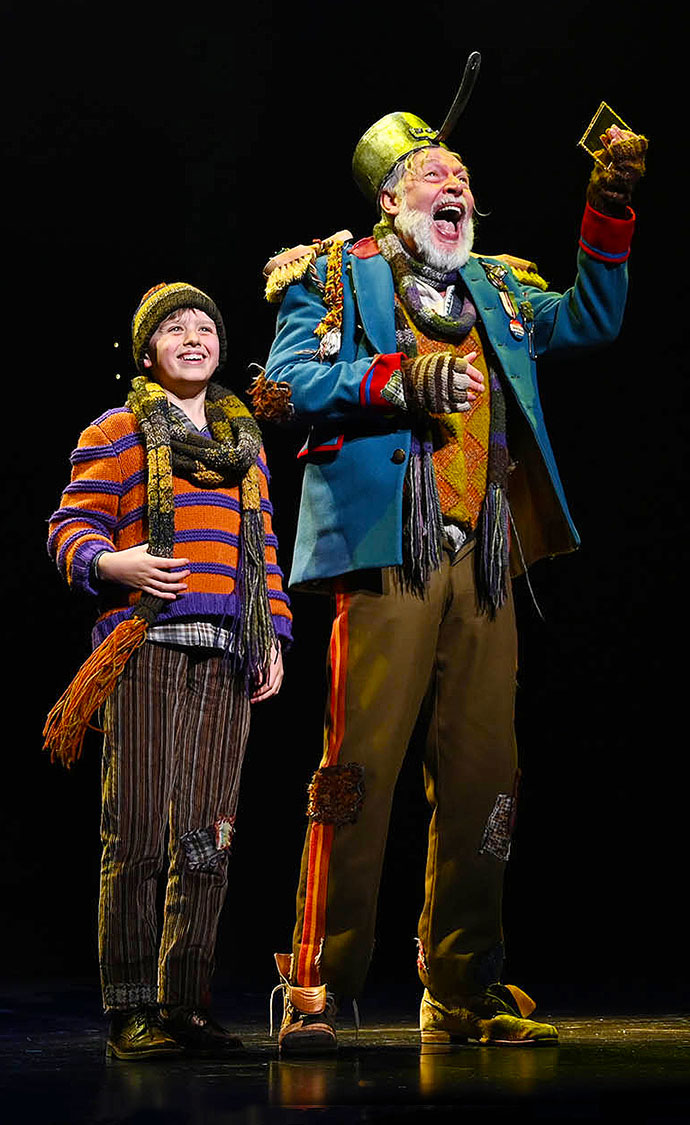 The production is playing at Melbourne’s Her Majesty’s Theatre after debuting in London and Broadway. Funnily enough we saw the London production 5 years ago on the last night of our three week visit there, and I was happy enough to see it again.  But boy was I surprised – there’s been changes!

Charlie is played by five talented boys who share the role, and Edgar Stirling (10yo) did a fabulous job in our performance.

I was delighted to hear that Charlie and the rest of his family played the role with Australian accents.

Even though it was a little jarring at first, the local references were really funny, and a clever way to make the production unique to Australia.

We meet Mr Willy Wonka (Paul Slade Smith) as soon as the curtain goes up, and he fills us in on his dilemma – Who will run the chocolate factory when he retires? 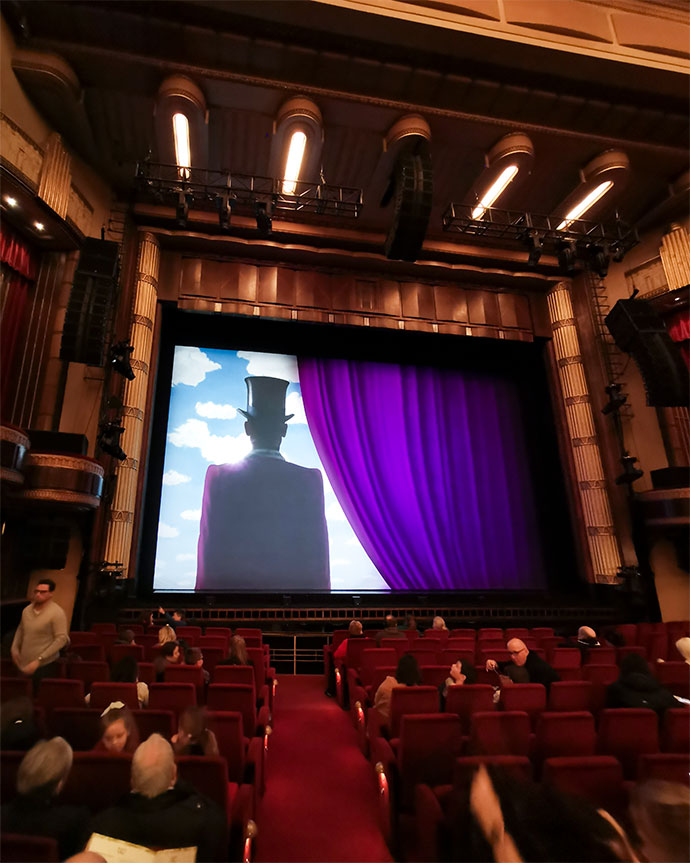 The music in the show includes some old favorites from the original film including “Pure Imagination”, “The Candy Man” and “I’ve Got a Golden Ticket”, alongside new score from the songwriters of Hairspray.

The new songs do a good job of introducing all the characters we love to hate – The gluttonous Augustus Gloop, the petulant Veruca Salt, Violet Beauregard who in this iteration is a social media star, and computer game addicted Mike Teavee.

Unfortunately I found the audio levels on some of the singers a little loud, which made it hard to follow all the lyrics, especially for the pop/rock style songs. 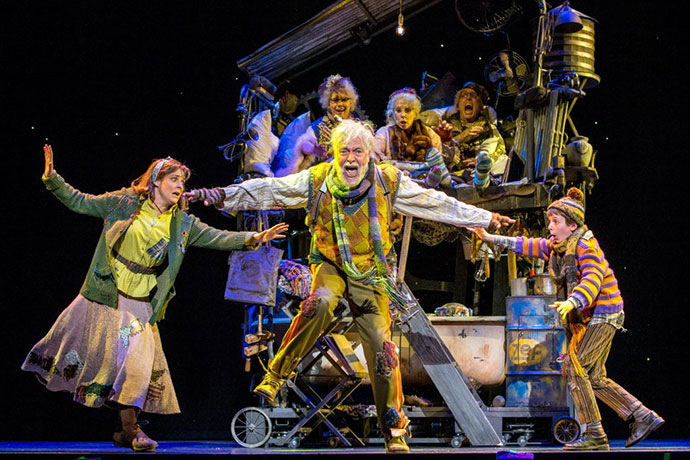 Lucy Maunder playing Mrs Bucket, a kind, caring mother and a woman of few words, had a beautiful voice and is probably the best version of this character to date.

The story progresses after the interval and takes us into the exciting chocolate factory, where are characters are dispatched one by one in humorous and sometimes disturbing ways.

Young children may find the scene where Verruca Salt is dismembered by giant squirrels a little disturbing. Emma was shocked, as the effect was quite convincing, until I explained that it was just a mannequin. Don’t worry, the actress reappears for a bow at the end.

Paul Slade Smith plays Willy Wonka with just the right amount of darkness, humor and zaniness that one would expect from the character. He is resplendent in his purple velvet jacket and top hat.

The costumes are fun, and I couldn’t help but admire all the hand-knits that the Bucket family wear. 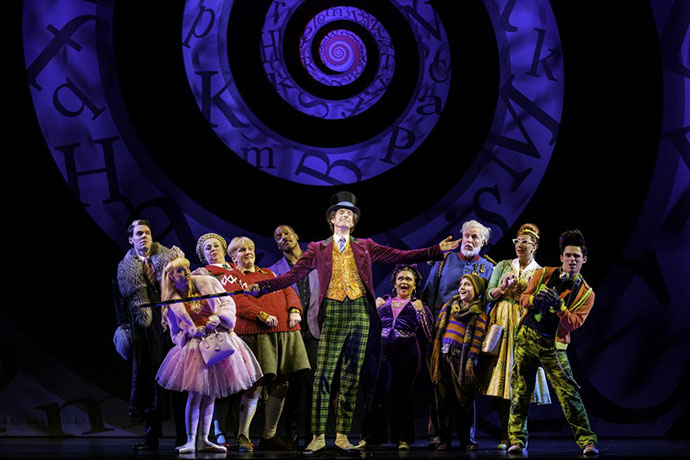 But what really made my night were the little stars of the show, which had the whole audience squealing with delight, the Oompa Loompas!

I don’t want to give too much away, because it was genuinely a super fun surprise that was totally different to the London show that we saw. But I’ll just say there was puppetry involved. 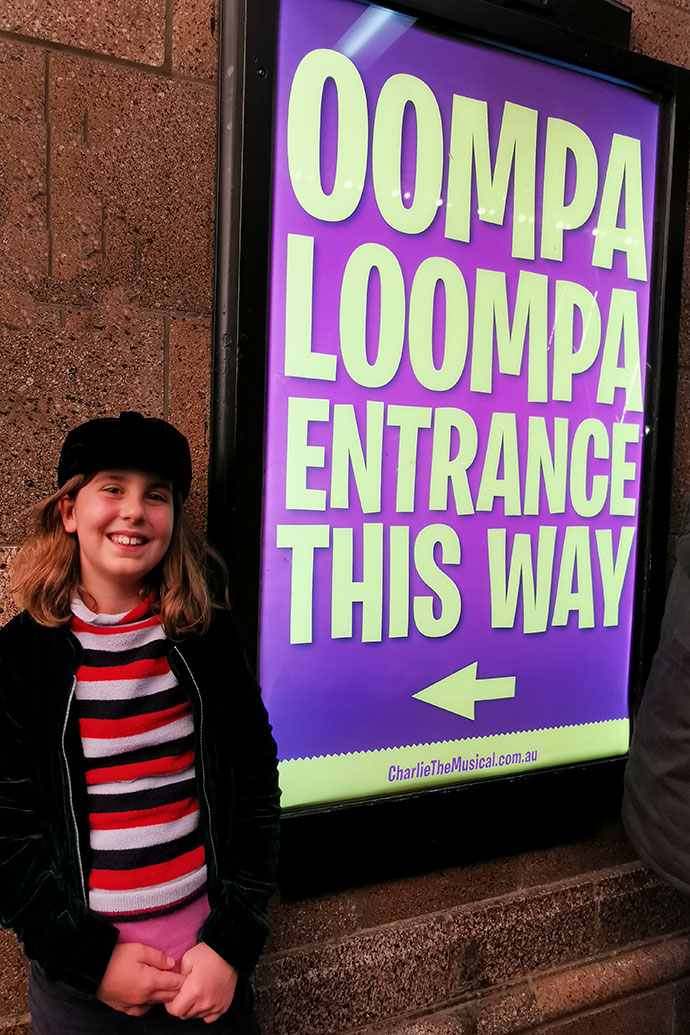 The sets are minimal and use giant projection screens to good effect. There is just enough set design to fire up your imagination.

Although I do wish they’d done a little bit more with the candy garden/chocolate waterfall scene. They are so spellbinding in the movies that the modest set was a tad underwhelming.

Overall we really enjoyed the show and I’d recommend it to anyone, young or old, who loves Roald Dahl’s books or the original movies. I particularly enjoyed that it was a reworked version from the original London musical, and I think I enjoyed this one much more. 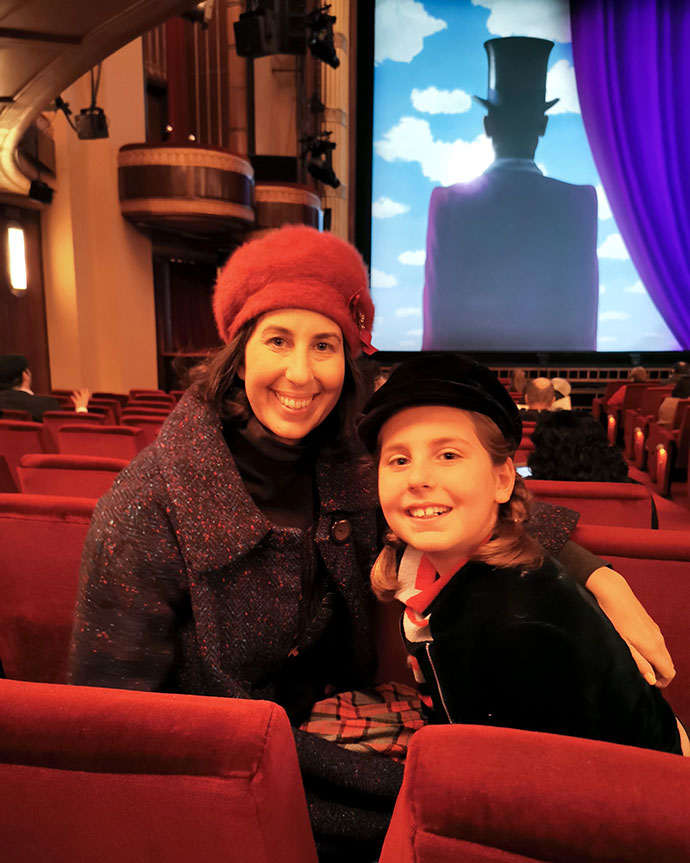 It’s quite a long performance (2 hours 30 minutes) so younger kids may get a little restless. The evening shows finish at 10.05pm so opt for a matinee if you are taking little ones.

Emma (10yo) really enjoyed the show and could follow the story, the narrative in the songs, and all the humorous references. 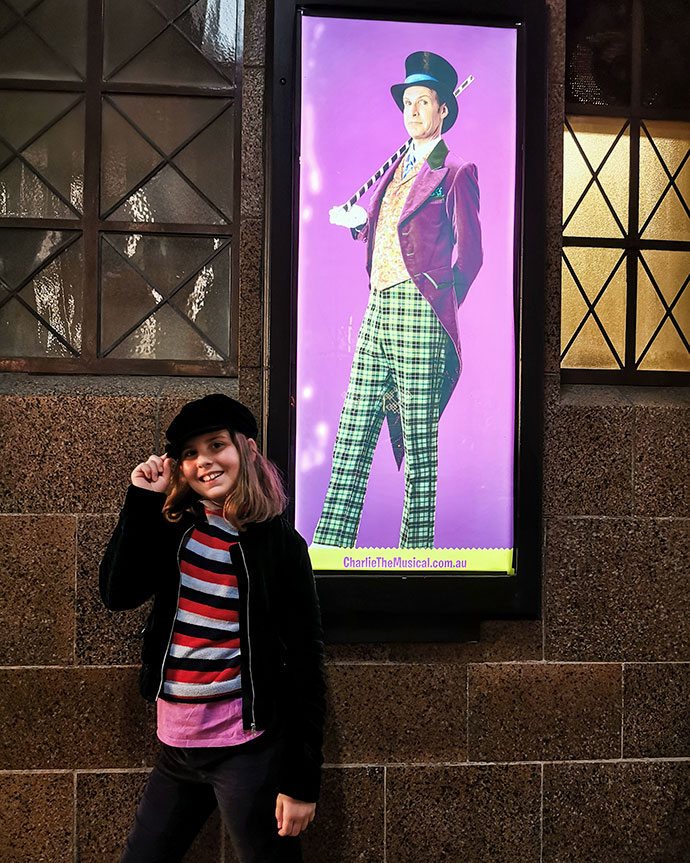 Charlie and the Chocolate Factory is playing at Melbourne’s Her Majesty’s Theatre from Friday 9 August for an extended season through to Jan 2020 . Buy your tickets here.