Last weekend I finally had a go at the craft of wet felting. It was not all sunshine and rainbows, some of my initial attempts would have made the front page of Pinterest Fail, but with a little persistence, I managed to make a few felt geodes and learnt a lot in the process. 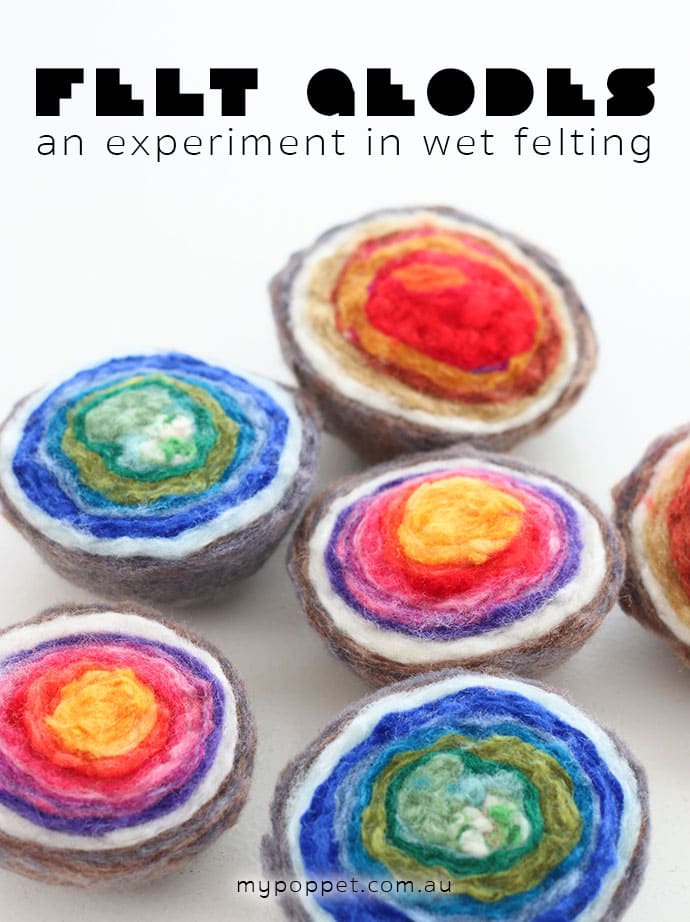 This post is not so much a ‘how to’, but more of a ‘how I did, and what happened when’. Just because I’m craft inclined doesn’t mean that every attempt at a project turns out perfectly first time around. I thought you’d appreciate seeing some of my not so successful projects amongst all the fabbo ones.

So here’s how it went down:
I thought it would be fun to start off making felt balls with Emma but unfortunately those pesky balls just weren’t forming and Emma started to get upset, she lost it about 5 minutes in and went to watch TV leaving me with a bowlful of soapy water and something to prove. 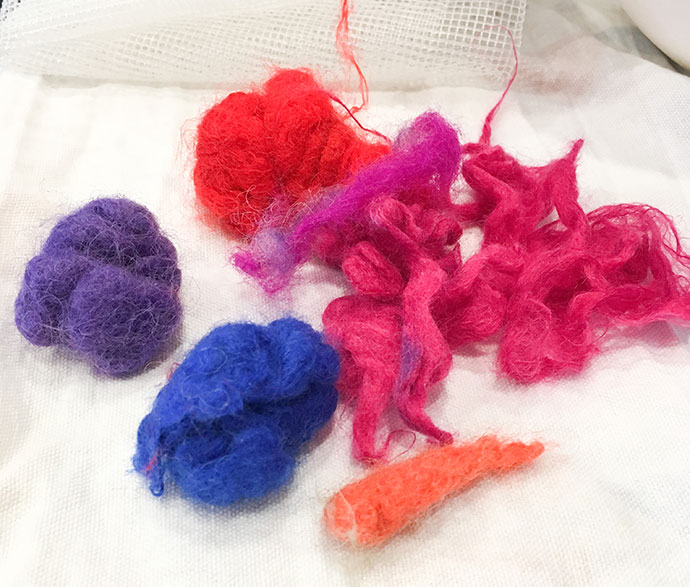 I thought I was doing it right, hot soapy water, squish the felt in your hands and ‘Voilà!’ But no voilà, not even a little. I was getting really stressed out, there was a lot of cursing too.


I turned to google – Question “Wet Felting, what am I going wrong?” and found this video which really helped.

Mistake number 1 – not soaking the felt enough to ensure it was thoroughly saturated.

Mistake number 2 – being way too aggressive and pulling the fibres apart before they have had a chance to really mesh. The lady in the video describes handling the felt like you are holding a baby bunny.

Mistake number 3 – not using enough soap – you really need to go for it with the soap. 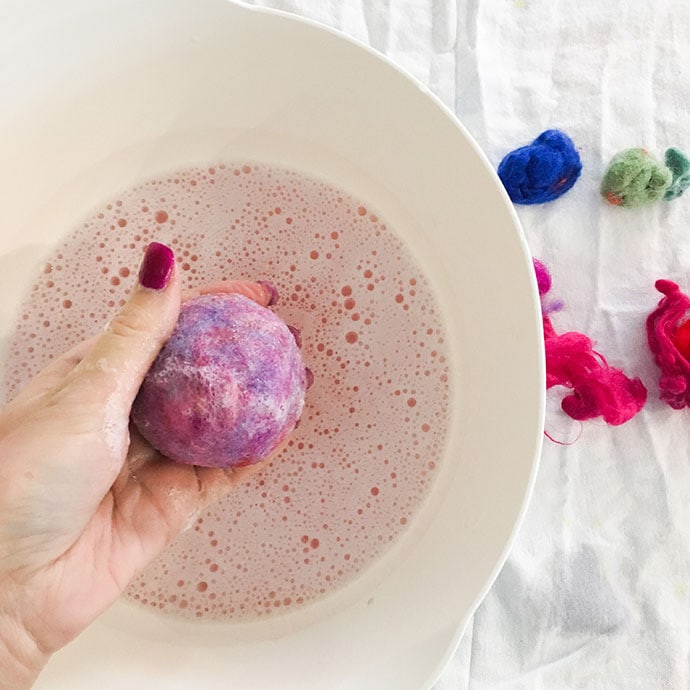 Finally my attempts are paying off

I tried again, and with a little more practice and a gentler touch, the felt was finally coming together. I thought I’d try making a geode ball with multiple layers of felt, it took several hours but I managed to get something felted properly (or so I’d thought). 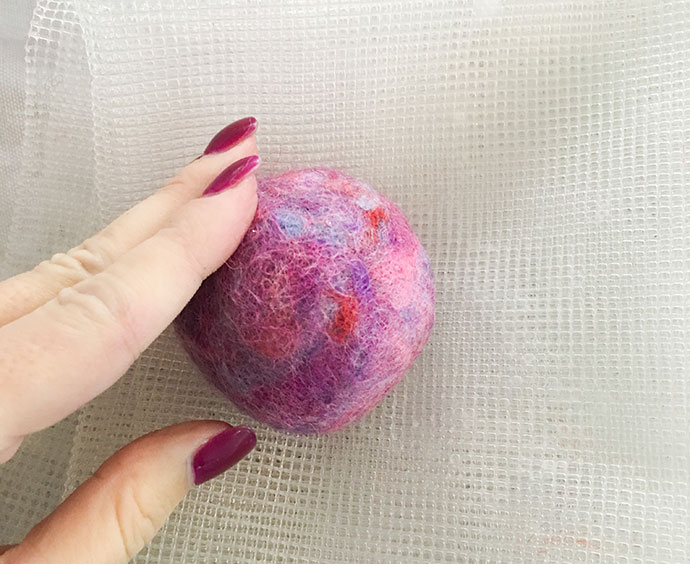 Once felt ball is holding together, I rolled it on a textured mesh to further assist in the felting process.

Unlike a tutorial I found that recommends all felt colours be wrapped when dry and then felted in one go, I worked on each layer at a time. 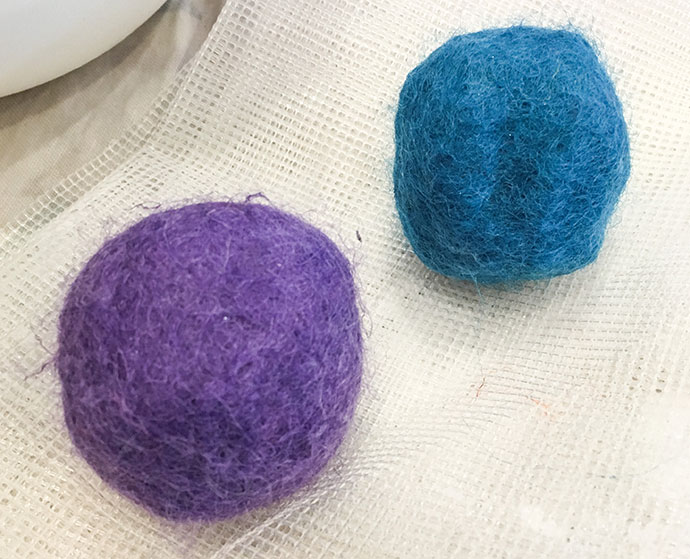 The one layer at a time didn’t work so well because even though each layer was fairly well felted, the layers didn’t bond to each other resulting in lamination. Once the geodes were cut, each colour separated from each other.

On the upside, now I know how to make a felt bowl.

So after about 3 hours with my hands in soapy water, they were looking a bit pruney. I put on gloves about half way through but it was difficult to feel the fibre through the gloves and water got in anyway. Maybe an elastic band around the top of the glove would help. 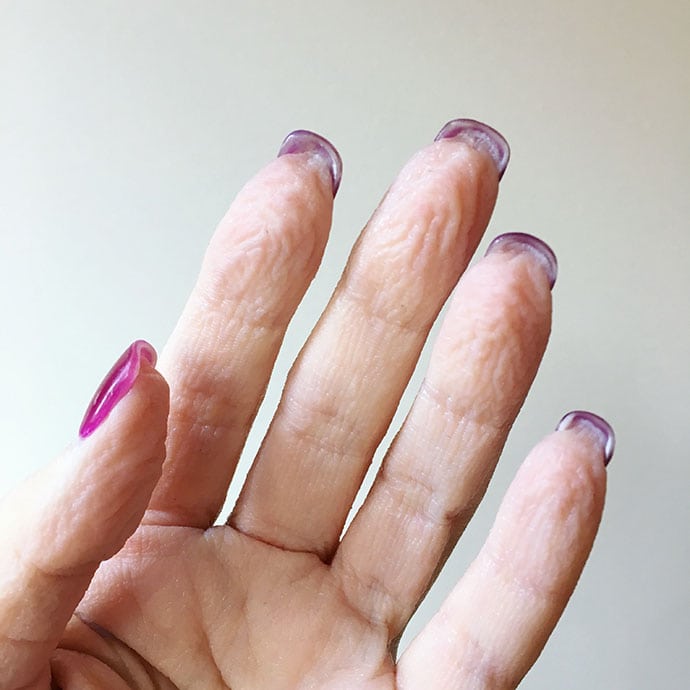 My hands got quite waterlogged after a few hours of wet felting.

I made three felt geodes in total and couldn’t wait for them to dry out so I could cut into them. They took about 24 hours to dry fully on the heater vent. 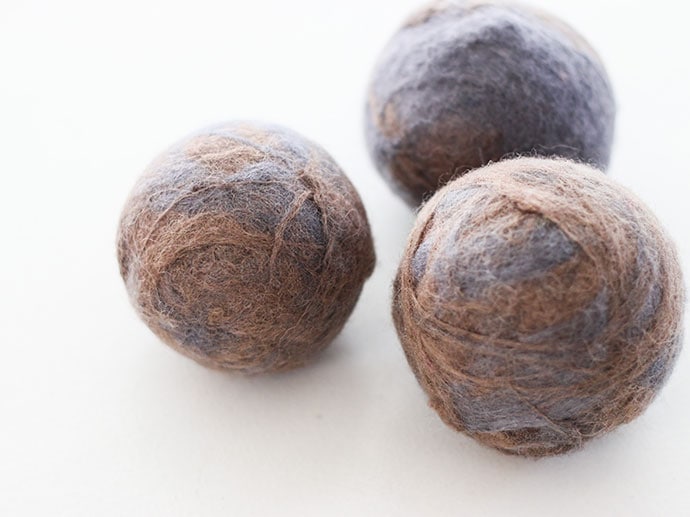 And after a bit of heavy duty cutting with some sharp scissors, the surprise was revealed. 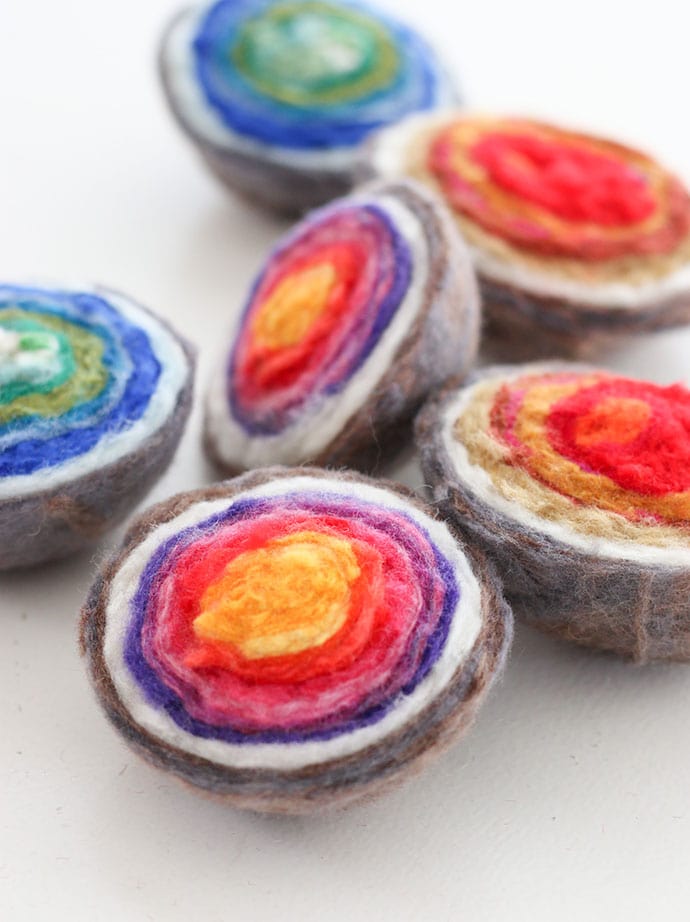 I love how the colour gradation turned out but was a little disappointed that some of the layers were only just barely holding together. I couldn’t help myself and had to do some needle felting to really make the felt nice and solid. 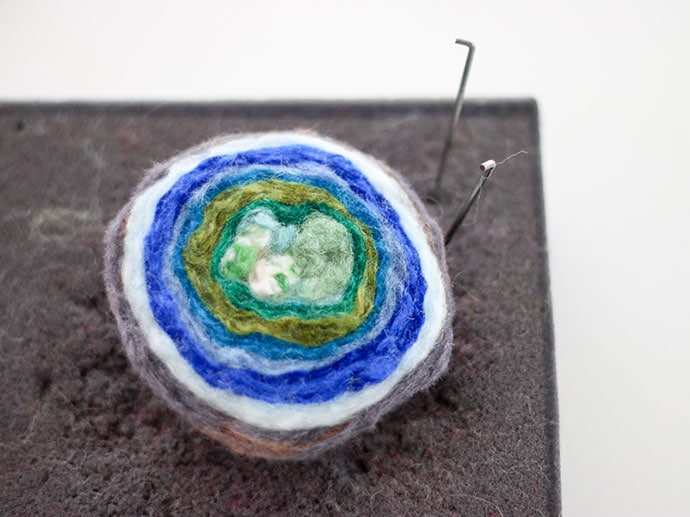 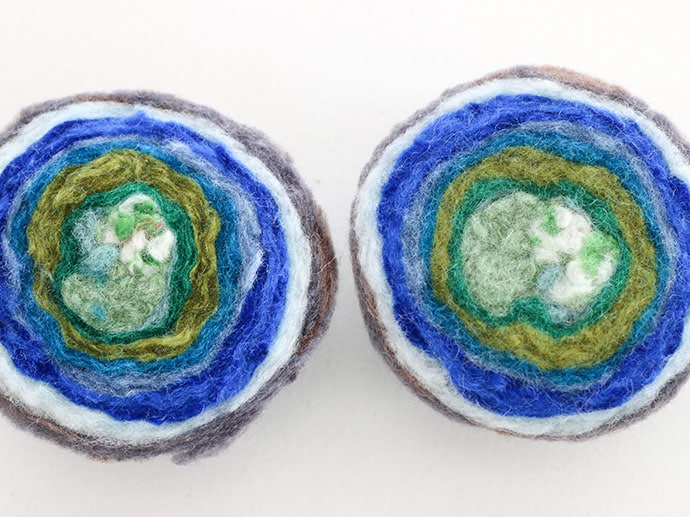 Left – Before (only wet felting), Right – After (with needle felting) 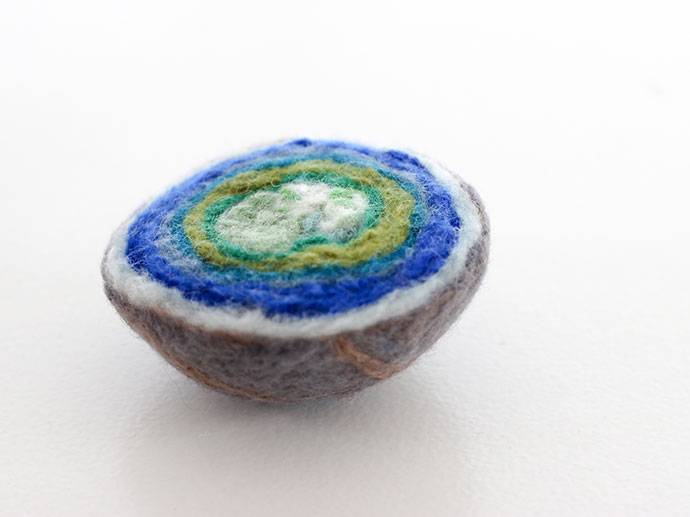 Needle felted to stabilise the shape 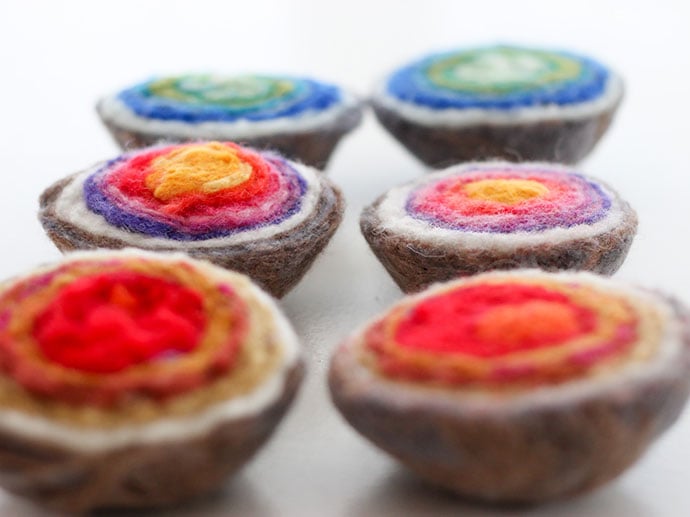 So now what to do with these hemispheres of felt. Well they make good, and very pretty, pincushions in a suitable receptacle. 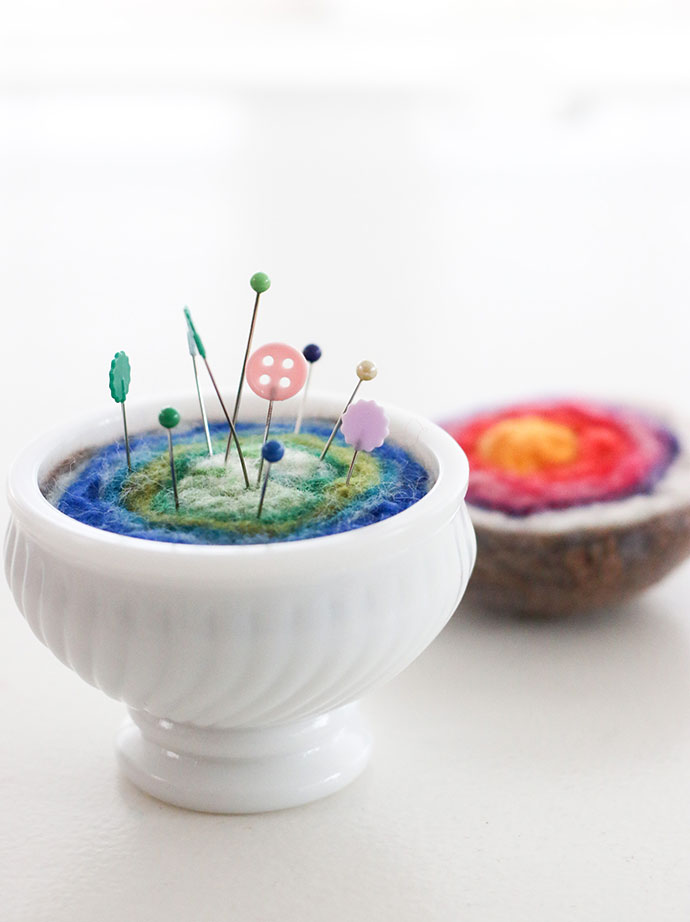 So what’s my verdict on Wet Felting?

Did I enjoy it? Not initially, but I can see the appeal, and as my technique improved it was quite satisfying feeling the felt come together.

Will I try it again? Yes, I’d like to have a go at making a flat object or a bowl. I’ve had enough of balls for the moment.

Needle felting or wet felting? I still prefer the control of needle felting and it’s much gentler on my poor hands, but the surprise aspect of wet felting is entertaining.

What about the mess? Yes there was A LOT of water, everywhere. Maybe best done outside next time. 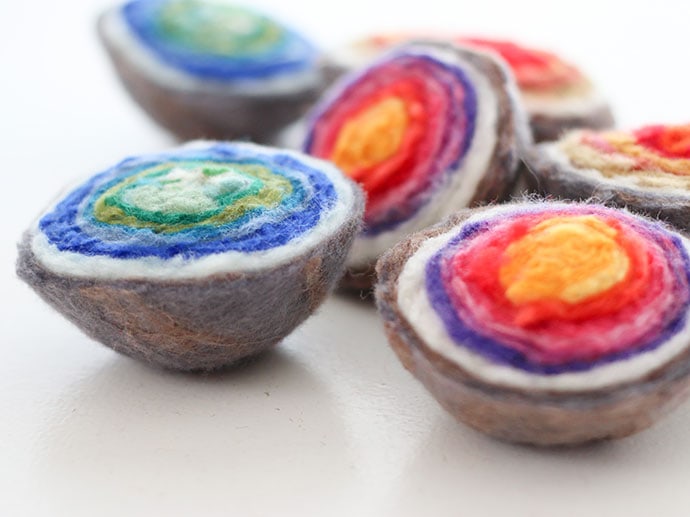 I’m interested in exploring how I can combine the technique of wet felting with some of the other things I do. I’ll keep you posted on my progress.

Now tell me, what do you think of my felt geodes?