I have never enjoyed sleeping with sheets and blankets, I’m a doona/duvet girl all the way. So now that Emma has graduated to a toddler bed I thought it was time she had a duvet of her own. I have quite bad dust mite allergies which improved once I started using a wool filled duvet, but I really struggled finding a toddler duvet for Emma that wasn’t feather or cheap polyfill. What to do?

Then I had a brain wave…make my own.
I purchased a single bed Aussie wool filled duvet (on sale, yay!) and here’s what I did:
(please excuse the quality of the photos – night time sewing)

Note – This project although looking quite straight forward was a bit challenging to finish to my very high standard. I would recommend it only to confident sewers as the sheer bulk of the quilt made it difficult to handle. 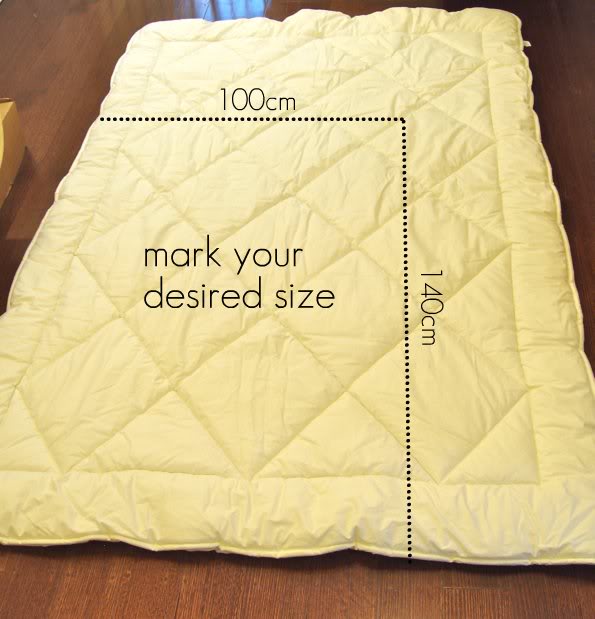 Step 1: Decide on the size you need the finished duvet to be and mark these out on your large duvet with a tailors marker or pencil. The size to fit Emma’s bed is 100cm x 140cmStep

2: Rather than cutting the duvet, which would let some of the filling out making a big mess, I decided to use my overlocker (serger) to cut and finish the edges at the same time. Sew along the marked lines. Also cut/serge away the current binding to reduce the bulk on the existing edges.

My overlocker managed to (just) get through ok but I had to pull it through as it was a little bulky, this caused me to break a needle, so take it slow.

You can stop at this stage if you don’t mind an overlocked/serged edge as a finish. I chose to bind the edges to make it neater. 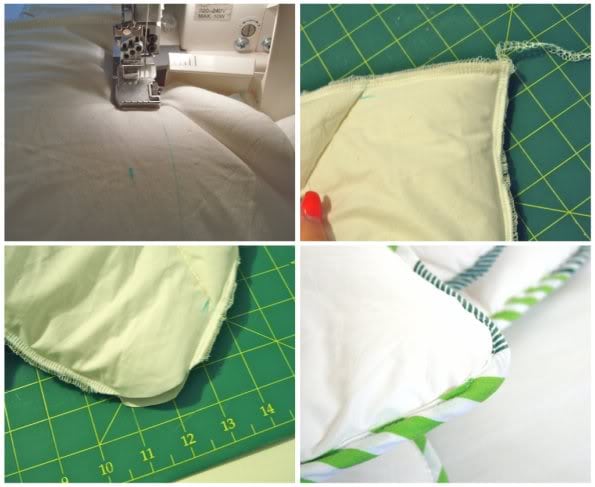 Step 3: Mark a small curve on the corners and cut.

The bulk of the duvet made it difficult but I think it looks pretty neat considering.