If you find yourself near Melbourne between now and the 6th of November, do yourself a favour and head on in to the NGV Australia, at Federation Square to see Making the Australian Quilt: 1800-1950. In an Australian exclusive, the exhibition brings together more than 80 stunning quilts, coverlets and patchwork fashion garments, as well as examples of intricate quilting techniques. 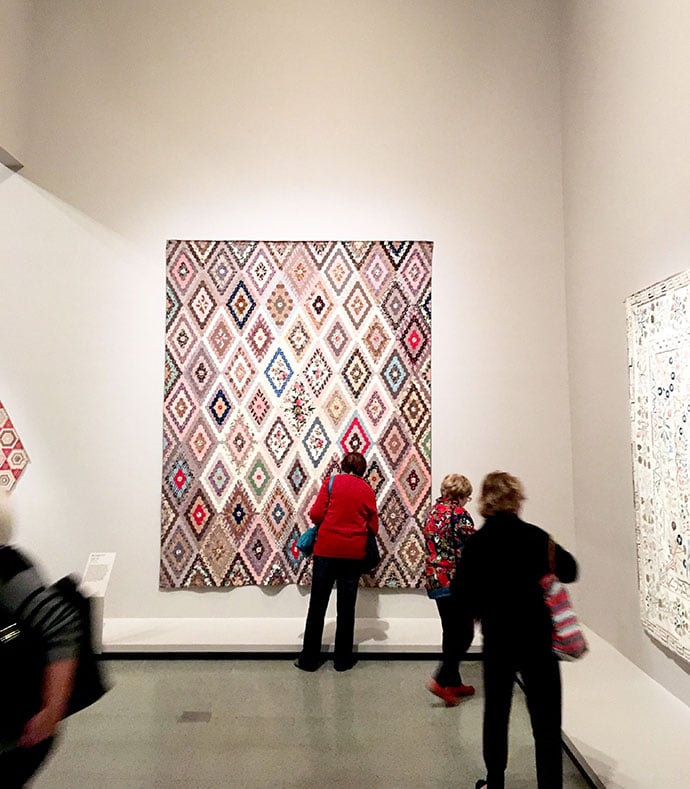 The quilt shown is made by hand and pieced over papers. It contains 120 stitches per hexagon, and contains a total of 6063 hexagons, meaning there are three- quarters of a million stiches in the quilt.

Not only are these quilts some of the finest examples of craftsmanship I’ve ever seen, but they each tell very personal story about the women and men that made them as well as a broader narrative about Australian society at the time.

I went along with my mum last week and we were both awestruck at the skill, creativity and resourcefulness shown by the makers of these pieces.

The collection starts it’s story with some of the first English quilts that were brought or sent to Australia, informing and influencing the early quilting practices of local makers. These quilts are in astonishingly good condition for their age probably because the they were made of expensive fabrics, and therefore may not have been a piece for everyday use. 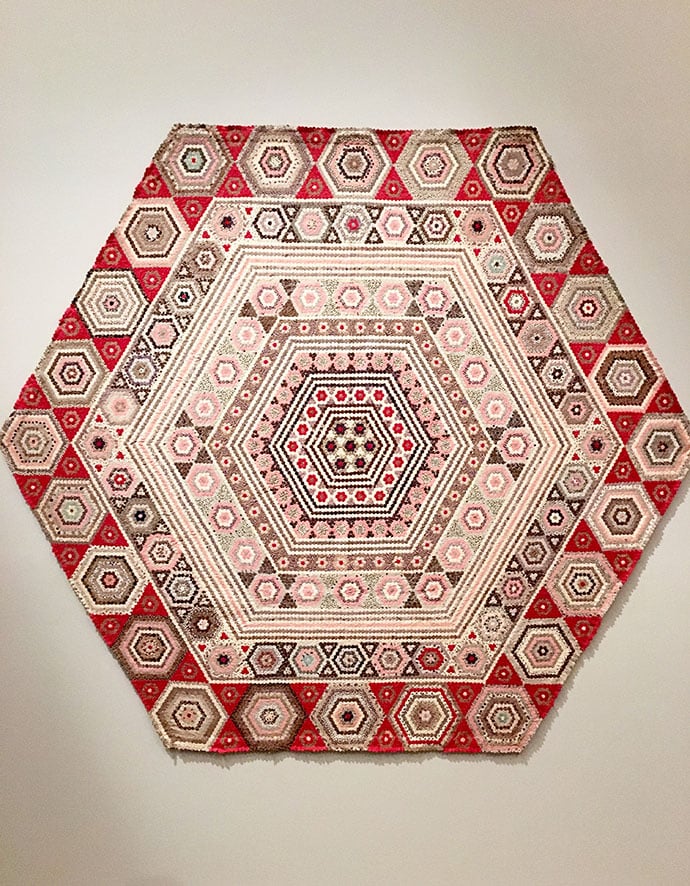 As well as being brought in the luggage of those immigrating to Australia, patchwork quilts were made en route, on board ships bound for the colonies. This quilt, made by Prudence Jeffery, was sewn on board The Phoenix, a sailing ship that left Liverpool on 14 June 1857 and arrived in Melbourne on 26 November 1857. The quilt is a masterpiece of workmanship, as each hexagon measures only one centimetre in diameter, and is pieced over papers in the English tradition. The stitches, as well as the hexagons, are remarkable for their tiny scale.

Many of the early colonies quilts were made by ladies of means, with materials such as silks, velvets and fine cotton.

“Although access to quilting materials and leisure time was very restricted during this period, the urge to remain connected with British culture and to emulate the fashionable pastimes of their home country remained a powerful influence on women. This desire to emulate and recreate British style was not only confined to quilting but was also reflected in a wide variety of activities, from cooking to gardening and fashion. Those who made the long journey to Australia in the first decades of the nineteenth century invariably brought with them all the articles of daily life, and had no immediate need to make their own quilts. As a result, few Australian quilts were made during this period, and even fewer survive.”

This miniature hexagon quilt was made on route to Australia, each hexagon is tiny and only 1cm wide. ‘Stunning’ does not even begin to describe how beautiful this quilt is, you really need to get up close to appreciate how intricate the work is. 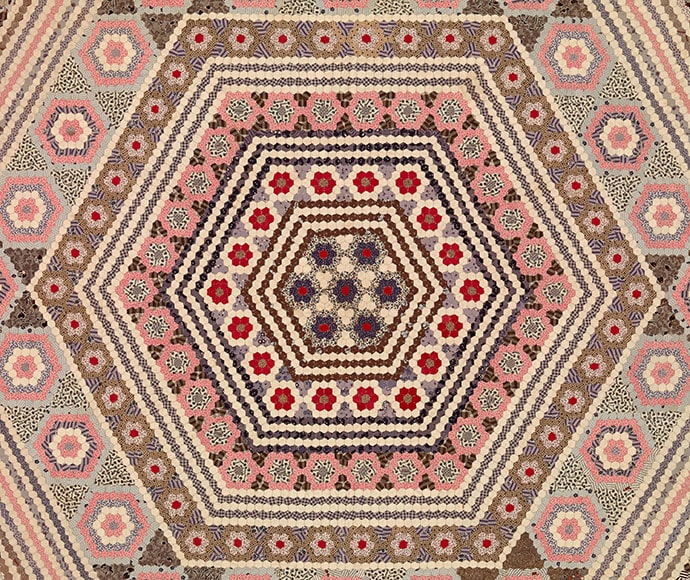 Many of the early quilts were pieced by the English Paper Piecing method and still contain their papers. I actually found this quite interesting as it signifies that these quilts were more for display. There were also several unfinished quilts which were displayed with the reverse showing the paper templates made from newspaper and old handwritten letters.

Many of the surviving examples of quilts from the gold rush era were made by women working in drapery shops and feature lustrous silks and brocades. There was quite an influx of wealth at the time so access to these luxury imported fabrics was accessible by those that had means or connections. This era’s collection of quilts was one of my favourites as the intense colours and geometic designs had a very contemporary feel. Mum and I both commented at how, without context, they could easily be assumed to be a modern quilt. 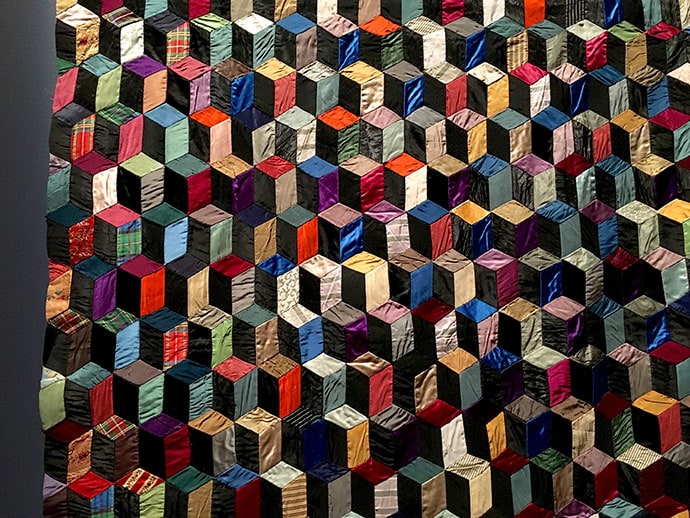 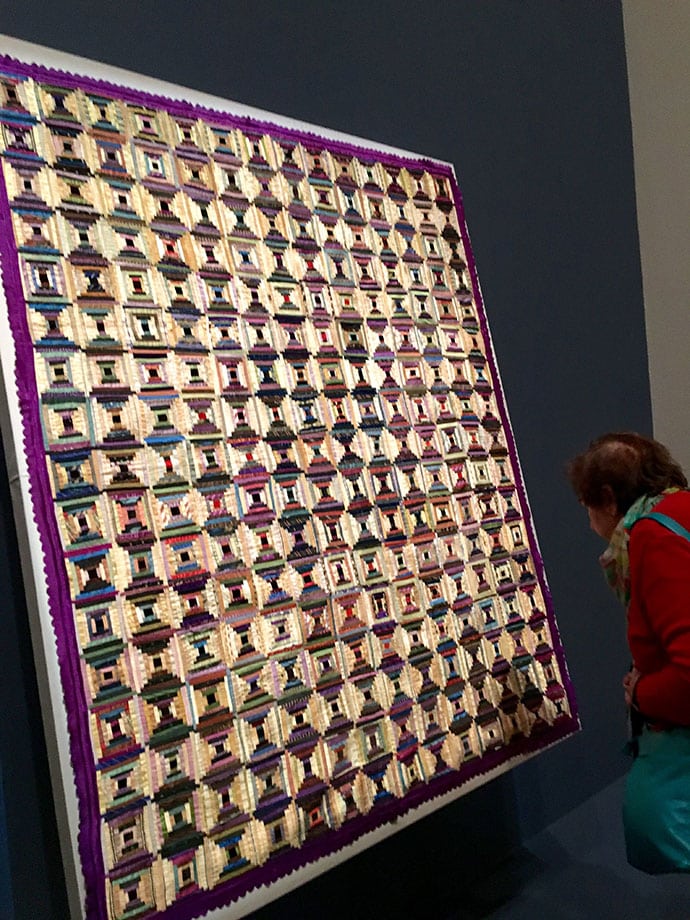 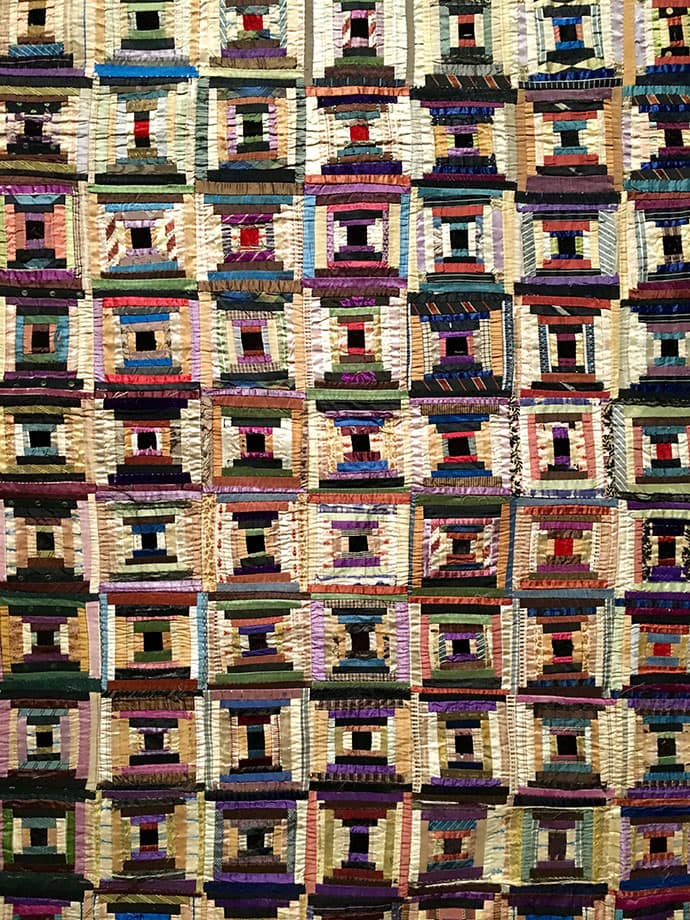 Jeannette Dick immigrated to Australia from Ireland with her parents, who established themselves in Sandhurst (now Bendigo) at the height of the Victorian gold rush. Jeannette worked in a drapers shop and was surrounded by bolts of imported silk satins and brocades. This log cabin quilt in graduated colour silks dates from just before her marriage in 1868 in St Kilda to Thomas Thomas, who owned a drapery shop in Emerald Hill, South Melbourne. It is believed Jeannette created this quilt as part of her trousseau, a key marker of leaving one’s family to embark on starting a new life and creating a new family.

There were many fine examples of Victorian era ‘crazy patchwork’ style quilts that featured heavily embroidered motifs. The emergence of the crazy quilt allowed far greater scope for individuality and expression. These rich quilts were often laden with personal meaning, quirky humour and commemorative messages. 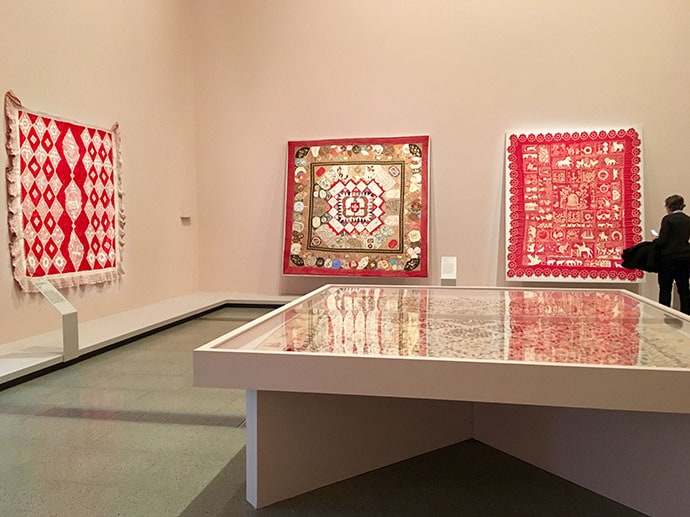 I, being a resourceful gal, was most delighted and moved by many of the quilts made from reclaimed textiles, my favourite being the bright yellow cigar ribbon quilt. It looks so simple from afar, but as you get closer, more and more details, like the printed coats of arms and cigar brand names, reveal themselves. It must have taken some patience and foresight to collect all those ribbons and hand stitch them together into such a restrained yet striking piece. 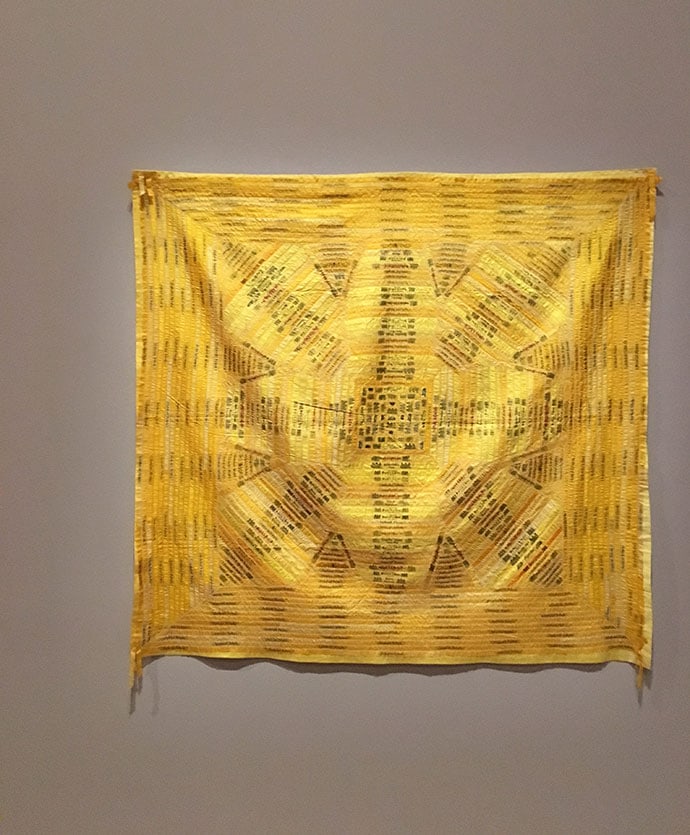 Born in a tent in Silverton, New South Wales, in 1887, Annie was the third of seven children of her Scottish migrant parents Thomas and Catherine. Her father built and managed four hotels in Broken Hill, where Annie was well placed to collect cigar ribbons, which were at the time used to package-up cigars sold to patrons of the hotels. The technique of using cigar ribbons in quilts and other domestic textiles was a well-established form of fancywork. 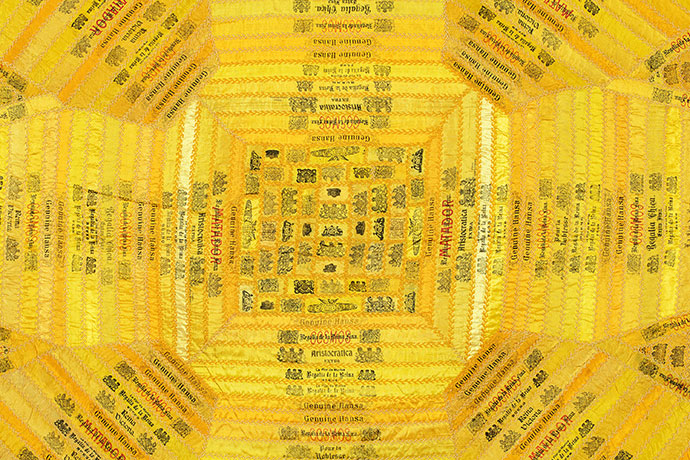 The exhibition then moves onto more utilitarian quilts know as Waggas.
“During the late 1800s a more rudimentary style of Australian quilt emerged in the form of the wagga. This term was used from the 1890s onwards to refer to quilts, blankets and bedcoverings constructed from found materials, such as grain bags and flour sacks. This uniquely Australian interpretation of the quilt is associated with rural workmen and households experiencing poverty and hardship, and reflects the adaptive nature of quilt making across socioeconomic boundaries. It was common for families to ‘make do’ by sewing quilts with scraps and old garments. By the 1930s old clothing and woollen suiting swatches from salesman’s sample books were regularly used to create quilts.” 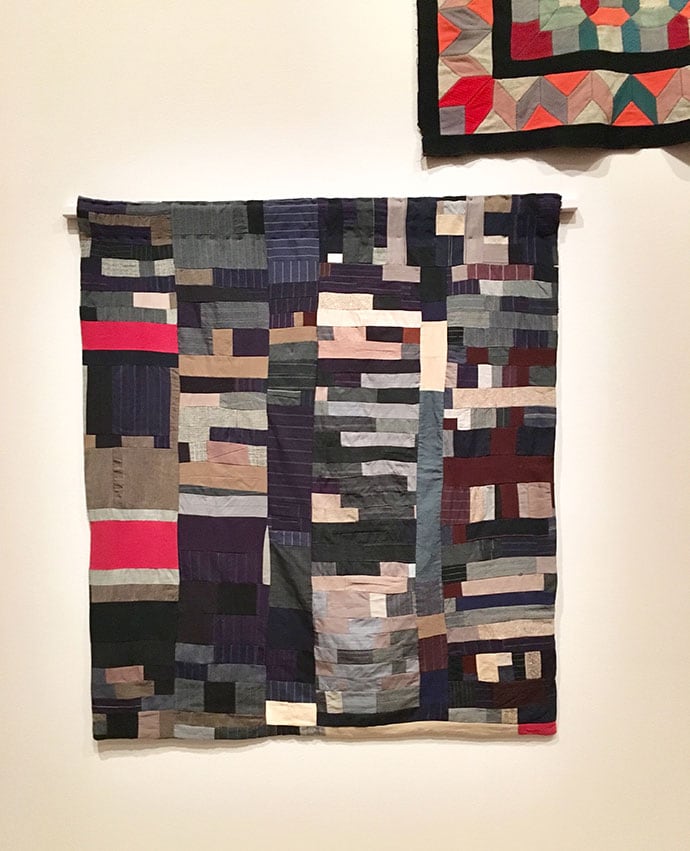 Some of these quilts were thread bare and you could see the many layers of worn out fabric peeking through. Patches were continually added on top to cover holes. There was something so visceral about these quilts, each stitch and patch a story of struggle, resourcefulness and determination to carry on. 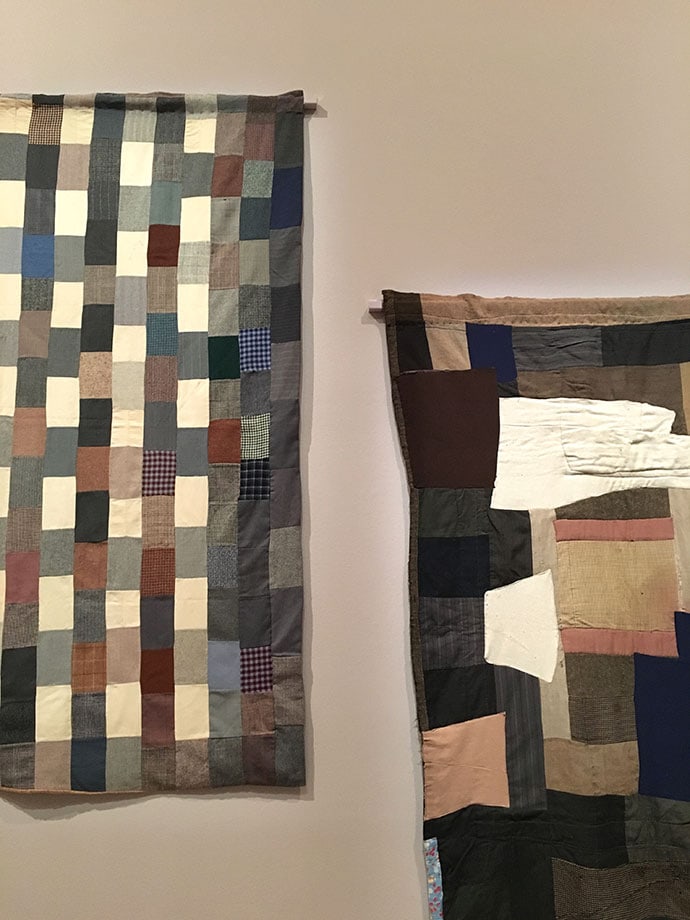 LEFT – In 1921 restrictions were imposed on European migration by the United States and Italian migration to Australia increased considerably. One such immigrant family were the Carraros, who arrived in Sydney in 1926 and settled in Marsfield, New South Wales. The family heard from their Australian neighbours that it was usual to sleep under waggas, and to demonstrate their willingness to assimilate the two daughters visited their tailor uncles in Bligh Street, Sydney, to source the pure wool books of sample suiting fabrics commonly used to make waggas. The daughters made four waggas, one for each of the three children and a double blanket for their parents.

This dressing gown by Zumma Carraro, the maker of the Wagga behind, was beautiful and had an interesting story. 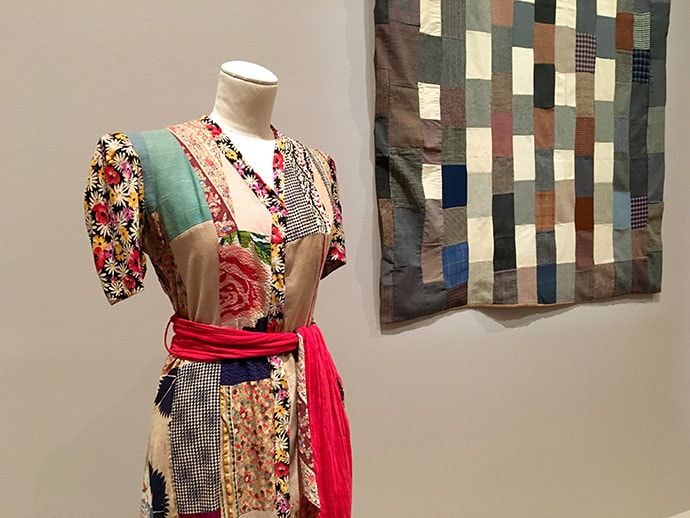 In high school, Zumma Carraro would stay the night at friends’ homes and observe her girlfriends in beautiful silk dressing gowns. As she could not afford a silk gown, Carraro decided to make her own from a patchwork of old dress fabrics. Carraro’s dressing gown was so special to her that around 1949 she had a portrait painted by Isaac Isaacson of herself wearing it. Carraro lived until the age of ninety-three and kept her single wagga and dressing gown her whole life.

Another piece that really moved me was a stitched army blanket by Corporal Clifford Alexander Gatenby during his internment in a German POW camp (Stalag 383). It was only recently found in 2000. 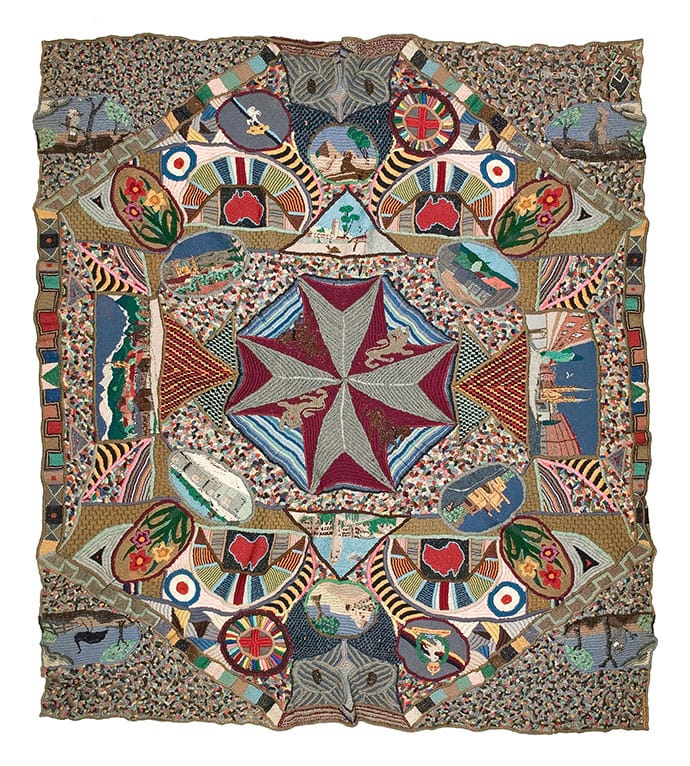 He sewed images onto his army blanket with pieces of wool and cotton taken from discarded garments in the camp, and used needles fashioned from the frames of eyeglasses, ground-down toothbrushes and other items. It took Gatenby two-and-a-half years to complete. He escaped from the camp in 1945 taking the army blanket quilt with him, saying that it represented too much hard work to leave behind.

Every stitch is so precise and the wool stitching is so think in parts that is resembles a carpet more than a blanket. I would have loved to see the back of this one to get a good look at the stitching.

I hope I’ve inspired you to go and see this wonderful exhibition, although it may seem like I’ve shared a lot here, it’s really just a small sample of the collection as a whole, and photos on a screen really can’t do it justice. If you can’t get to Melbourne, I hope you’ve enjoyed what I’ve been able to share along with my thoughts.