Whilst Pilgrim with her designer’s eyes was absorbing all the colours and patterns in Japan, I was a little bit fascinated by Japanese bathrooms. You see the combination of heat, lots of fluid and the fact that I have the bladder which is the size of a pea, meant that I spent quite a lot of my trip visiting the lavatory.

Here are the things that impressed me/amused me most about toilets in Japan (some handy hints in here too):

-Most public toilets are very clean but don’t always have toilet paper. They are nice enough to tell you that on a sign when you walk in, except I usually read it on the way out. Hint: Keep a small pack of tissues in your handbag, there are often people handing out promotional packs at train stations. 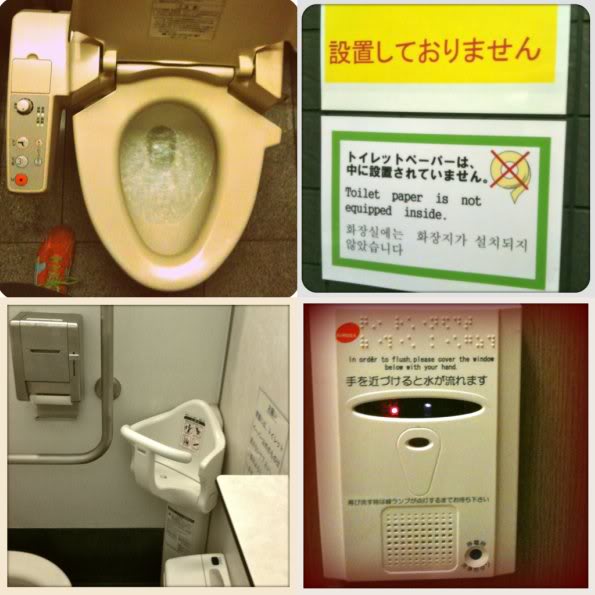 -Most Western style toilets (even in public places) are super fancy with seat warming functions and warm water jets. Why you would use the bidet function at a cafe or department store baffles me, but each to their own. Warm seats feel a bit weird, like you have followed someone that has been sitting there for a while, eew! Hint: Best not to fiddle with the knobs unless you want to be surprised.

-Parents are catered for quite well, I saw a few family toilets, but most cubicles had these toddler seats in them, and a lot of ladies toilets have mini urinals for boys to use. It took me a while to work out what the urinals were for until I saw a little boy using it.

-Most toilets are self flushing or have a swipe sensor rather than a button. You get so used to the automatic flush that it’s almost annoying when you actually have to find a button to press. 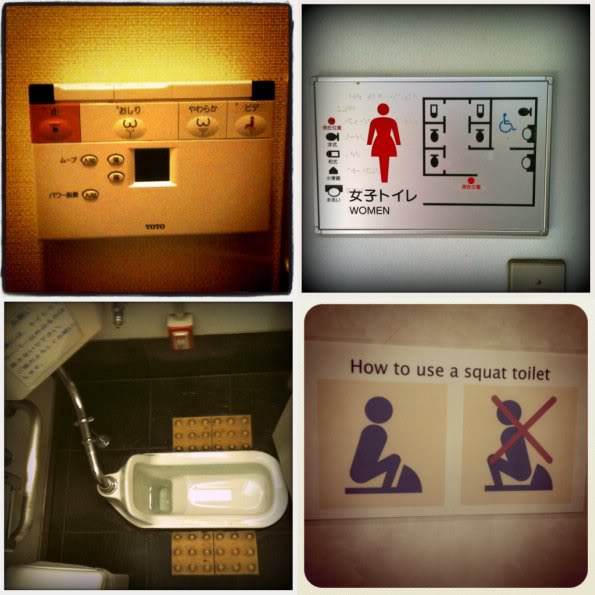 -About half of the toilets in a block are usually Japanese style (squatting), they are easier to use than you may think. Most bathrooms have a map when you walk in to identify which cubical is which, handy! Hint: Japanese squat toilets are more likely to be vacant, which means less waiting.

-Most public toilets do not provide soap hand towels or hand dryers. Those that did have hand dryers had them switched off to conserve power. It’s customary to carry a small hand towel (like a face washer) in one’s bag for drying your hands. Hint: Buy some pretty hand towels as souvenirs, they are sold everywhere, the designs are super cute and they are quite inexpensive. 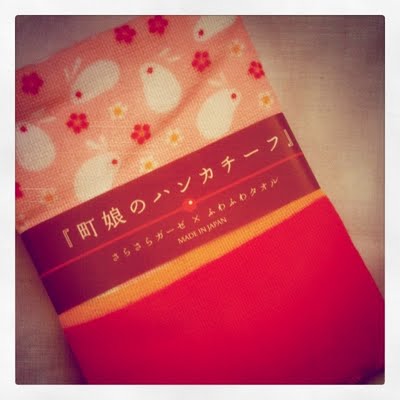 I bought this bunny hand towel. It can also be used to mop up perspiration but whatever you do, NEVER blow your nose with it. Hint: Best to blow your nose somewhere private, in the toilet is best with fake flush running so no one can hear.

-If you are in someones home or in a ryokan there are often little toilet slippers you are supposed to wear whilst in the toilet. Hint: Best not to wear them out, it’s not a good look!

So that is Cinti’s guide to Japanese toilets…and if you ever get stuck “Otearai wa doko desu ka?” means, Where is the bathroom?

Save Money by making your own Homemade Laundry Powder

It’s time to gather up your prettiest fabric scraps, I’ve got a gorgeous Easter craft project that will make great use of them. These fabric covered Easter eggs are very easy to make, and add a colourful decorative touch to your home decor at Easter time. Fill a bowl with colourful fabric covered eggs for a stunning table centerpiece, or…