I’ve been crafting for a long time, and for all the lovely and well made finished projects I post here and on Instagram, there are a few lurking around my craft room that were total failures.

This week I had the brilliant idea to crochet a big storage basket from leftover cotton yarn. It was designed to fit into a specific spot in my yarn storage cupboard (to store my yarn in!), and I was pretty excited to write a pattern for it. 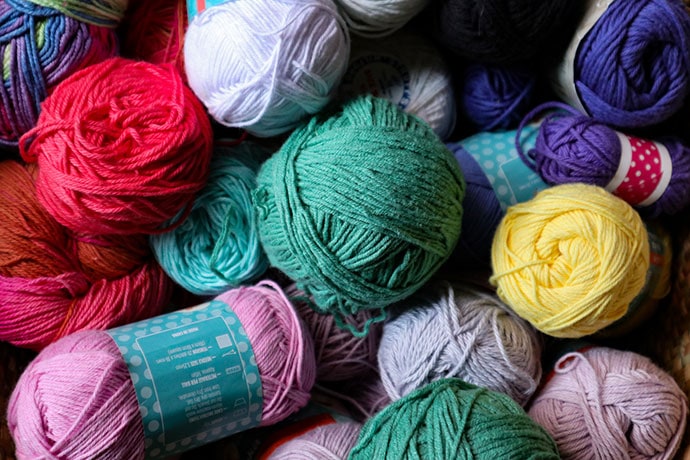 EXCEPT it was a total CRAFT FAIL!

The concept and pattern were solid, but the actual finished project wasn’t. Rather than a lovely colourful storage basket, I ended up with a colourful floppy mess. 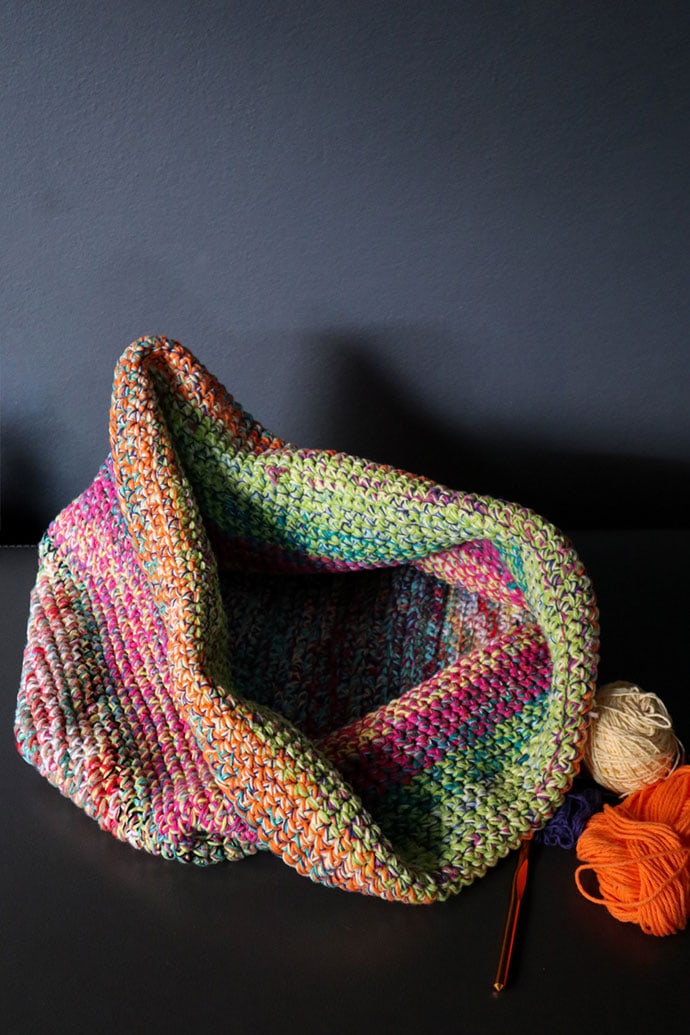 I had a vision in my mind as to how my finished basket was going to look. Normally I can visualise finished items fairly well, but in this case, the material selection let me down.

I really needed to use a coiling technique like in this project, but with a sturdy rope core. The cotton yarn on its own (I held several strands together) would have worked fine for a small basket, but because this one is so large, the weight of the yarn just collapsed the sides.

It’s was a bit disappointing to finally admit there was no fixing this project, because I’d spent about 4 evenings working on it. But sadly I’ll be cutting my losses and unravelling the lot! 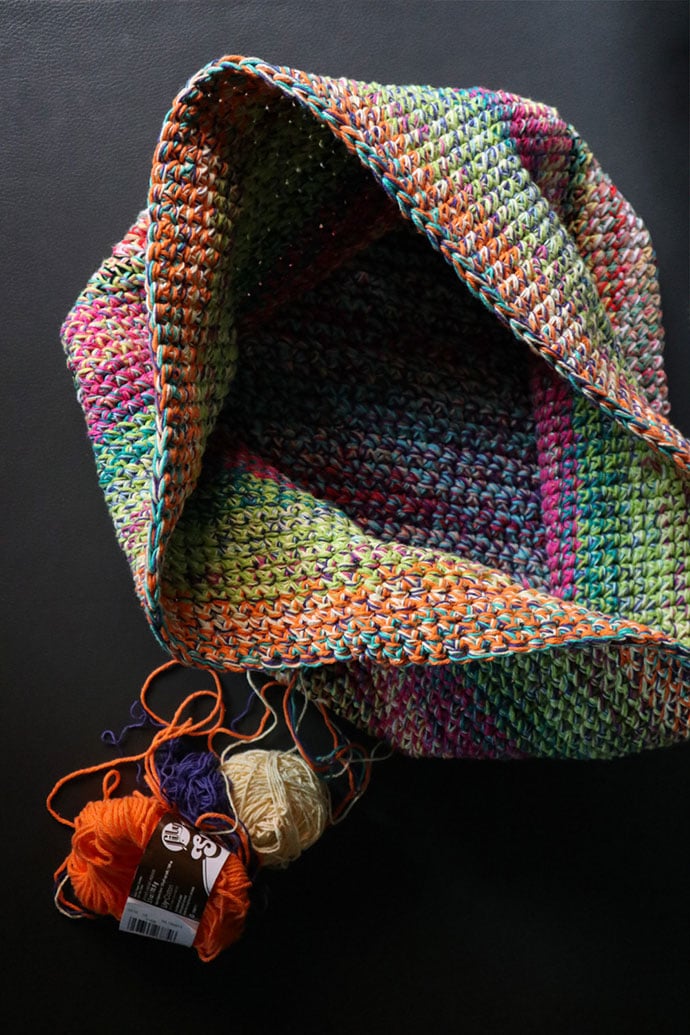 It did have a few redeeming factors that I’ll be working into another project, mainly the specked colour effect that gradually changes up the basket. Look out for that in a future crochet project. Also holding various strands of yarn together was a great way to use up odds and ends left over from other things I’d made previously.

Another bonus is that at least the materials are not lost. When it comes to failed yarn projects, at least you can unravel. It’s a bit harder to ‘un-cut’ fabric.

I wasn’t going to post about this craft fail, but then I thought “why not?” Just like on most social media where we only get the best, most curated parts of people’s lives. Craft blogs and Pinterest tends to show only the ‘good bits’ and not all the failed projects and experiments along the way.

When you’re starting out, a ‘craft fail’ can be really disheartening, and you may lose your motivation to have another go. I imagine lots of people gave up sewing after creating a few sad-looking projects in High School textile class.

So you’ve made a craft project and it didn’t quite turn out as you’d envisioned? What next? Here are some tips to help you get past it and make the next project even better for it.

Sometimes I make things and they don’t turn out to my liking ‘taste-wise’. Maybe the colours don’t quite work with my decor, or the sizing isn’t quite right, but apart from that it’s a perfectly good item. If it’s well made and works for its intended purpose, maybe you just need to find a new home for it.

That cushion that clashes with your couch may be perfect for a friend’s sofa, or a hat that is slightly too big would be appreciated by a local charity. Gift, donate or even sell well made ‘craft fails’. Just because you don’t love it doesn’t mean someone else wont.

Craft Fails are a great learning opportunity, if you work out what went wrong this time, it’s unlikely you will make the same mistake again.

Was it the material choice, technique used, a silly mistake, pattern error or your skill level that led to the poor outcome? Once you work that out, you are one step closer to getting it right next time.

3. Can it be transformed into something else?

Yes sometimes a project can be saved, I’ve had many experiences where I started making something and it’s ended up as a totally different, really awesome thing. Consider some out of the box thinking and you may find yourself pleasantly surprised with what you create.

If you get an inkling that the project is going in the wrong direction, scrap it then and there. It’s east to fall into the ‘Sunk Cost Fallacy‘ trap where your decisions are tainted by how much time or emotional investments you’ve put into a project. The more you invest in something the harder it becomes to abandon it.

If your creative mojo has gone AWOL, and there’s no saving whatever you are making, it’s better to just scrap it and move on.

5. Can you reuse the materials for something else?

I never throw away anything that may be useful for making something else if I can help it. (I try not to hoard things though). Waste not, want not is my motto when it comes to crafting materials.

Yarn projects can be unraveled, zips can be unpicked and used again, fabric can be cut up again for smaller sewing projects. You can find a whole range of fabric scrap craft projects here.

The one saving grace of failing spectacularly, is that some craft projects turn out so bad that they are comical. I quite enjoy the websites Craft Fail and Pinterest Fail when I need a good laugh.

I know it can be really frustrating to put a ton of effort into making something and it turns out less than stellar, but remember, it’s just craft! If you’re lucky your craft fail may fall into the ‘it’s so bad it’s good’ category and bring a smile to someone else who’s having a crappy day. 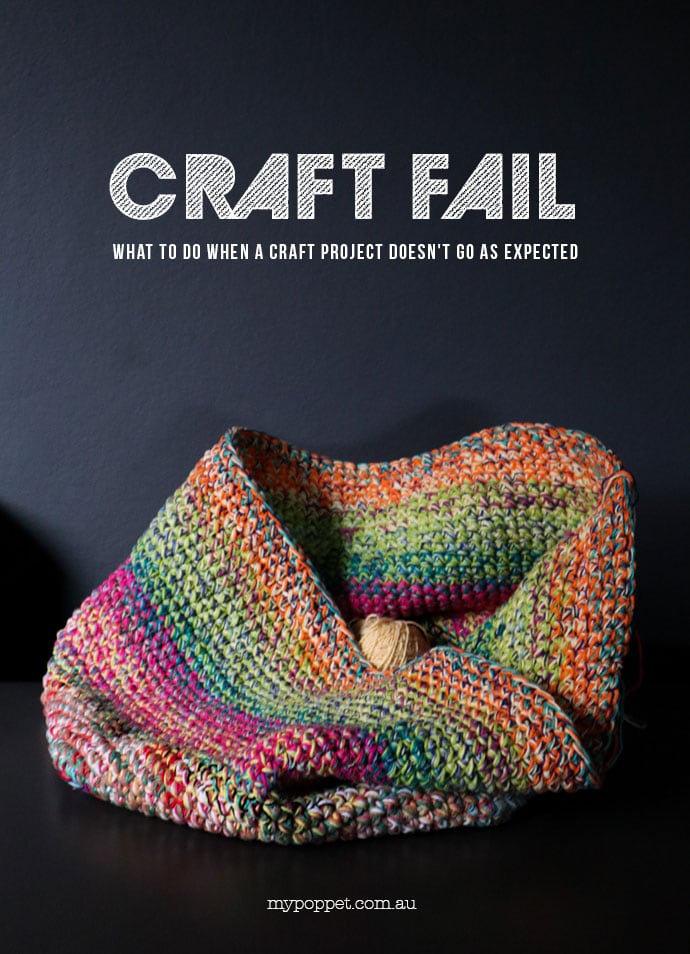 I hope I’ve helped out a little when it comes to making the most of, and moving on from craft projects that didn’t turn out as well as you’d hoped. If you’ve got any further tips or advice I’d love to hear it.

Leave me a comment telling me about your most frustrating or hilarious ‘craft fails’, I guarantee it will be cathartic.